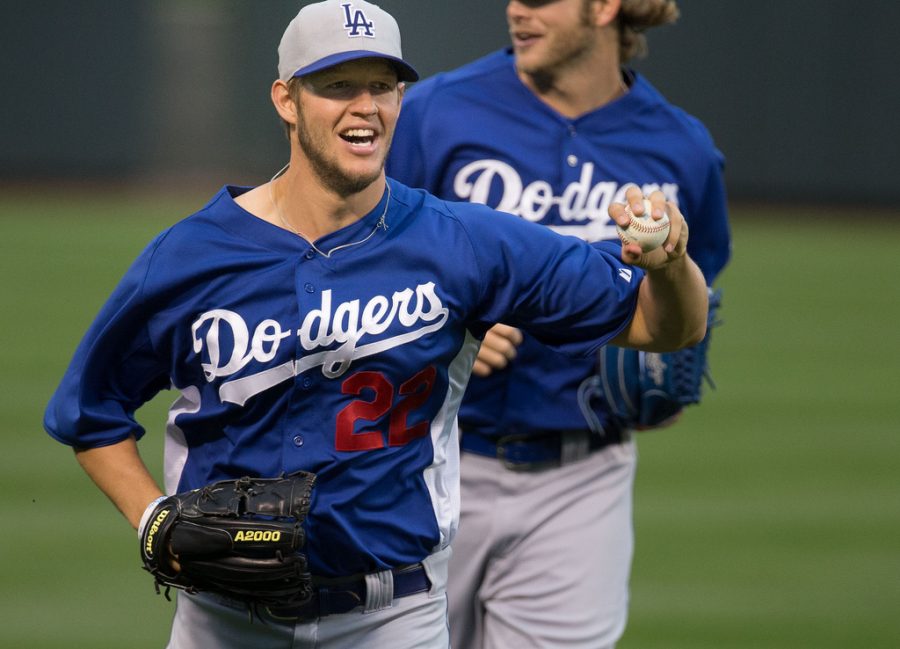 The Major League Baseball season began on March 29, and is scheduled to end on Sept. 30. (Photo courtesy of Keith Allison)

With the MLB season just getting started, our sports writers make their early predictions for who will win it all in the fall.

​​​​​After losing game seven at home to the Houston Astros in the 2017 World Series, the Dodgers are playing for redemption in 2018. The Dodgers’ boast a strong pitching rotation led by Clayton Kershaw, who had the National League bests with a 2.31 ERA and 18 wins, and placed second in National League Cy Young Award voting. Alex Wood also had a stellar season, reaching his first All-Star game and finishing with a 2.72 ERA and 16 wins. The Dodgers have strength on both the offensive and defensive sides. Justin Turner was the strongest hitter for them in 2017 with a .322 batting average, and the team was awarded the MLB’s Defensive Team of the Year honor. Also important for championship-winning organizations is to acquire and develop young players, and the Dodgers have an impressive group in Cody Bellinger, Corey Seager and Chris Taylor. Cody Bellinger was the 2017 NL Rookie of the Year, and broke the NL record for home runs in a season by a rookie at 39. The Dodgers re-signed veteran Chase Utley during the offseason to a two-year contract, and his experience and leadership in the clubhouse is an asset to a team going for a World Series title. With pitchers still in their prime, a good young nucleus and experienced leaders, the Dodgers are on track to accomplish what they fell short of last season.

The Yankees are a team that was expected to be in rebuilding phase. After a surprising 91-76 season, they made it to the ALCS but lost to the Astros in a seven game series. However, they’ve made moves to get younger and are primed to be extremely competitive this season and years to come. The Yankees, a team typically known for their outrageous spending, will go into the season with only the seventh highest payroll in the league. This includes the record breaking 13-year and $325 million-dollar contract they acquired with Giancarlo Stanton. Stanton, who they traded for in the offseason, launches some of the farthest home runs baseball has ever seen, including 59 home runs with the Marlins in 2017. Paired up with the youth and potential of Aaron Judge, these sluggers were the only two players to bat over 50 home runs last season. Who knows what they can do together in pinstripes? With other big bats like Gary Sanchez and Didi Gregorius, the Yankees will have one of the most stacked batting orders in the league. In the bullpen, they have young pitchers like Luis Severino, Chad Green and Jordan Montgomery who all had breakout seasons last year. With other pitching veterans on their roster like CC Sabathia and Masahiro Tanaka, I predict the Yankees are well on their way to the organization’s 28th championship.

There are few teams in baseball that can compete with the Nats on offense. Their lineup is full of dangerous hitters, and it is a full-on nightmare for opposing pitchers. Bryce Harper, Daniel Murphy, Ryan Zimmermann and Anthony Rendon all achieved a batting average over .300 last season while hitting over 20 homers each. Trea Turner is liable to steal a base any time he gets on, and Adam Eaton is looking to be a formidable leadoff hitter after missing a season. While their pitching staff lacks some depth, it’s hard to find a better three starters than Max Scherzer, Stephen Strasburg and Gio Gonzalez. The Nats haven’t broken through to a World Series just yet, but they have plenty of playoff experience and they keep on improving.