Ambassador Bernicat ’75 speaks on experience at the college, service abroad: an interview with the commencement speaker 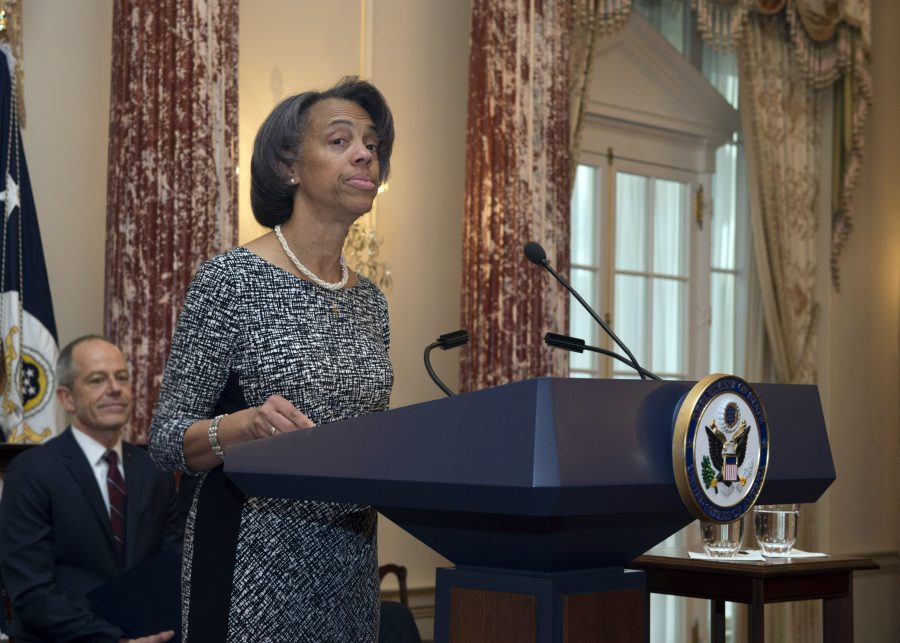 Marcia Bernicat '75 will deliver the commencement speech at the graduation of the class of 2018. (Photo courtesy of Wikimedia Commons)

Marcia Bernicat ’75 has worked overseas for much of her adult life, as a member of the United States Foreign Service since the early 1980s and as an Ambassador to three countries over the course of her career: Senegal and Guinea-Bissau from 2008 to 2011 and Bangladesh since 2015.

Before she embarked on her career, Bernicat called Lafayette home for four years, where she earned her B.A. in history. Living in Ruef Hall, then simply “New Dorm,” she was a member of the second ever co-ed class. With an estimated 250 women on campus total, the number of African-American students was even smaller—just enough to fit around a table at the dining hall, Bernicat said.

The ambassador, who will return in May to deliver the commencement speech at graduation, said she chose to attend the college in part because she wanted to face the “challenge of going to a school in which the vast majority of the college [was] male,” as her father encouraged her to. He told her, she said, that the experience would be “training for the real world.”

“Boy, was he right,” Bernicat said. At Lafayette, male upperclassmen were not used to having women in the classroom, let alone having women perform equally to them or even surpass them, she added. Some were even resentful, she said, but competitive experiences were worthwhile, especially because it was “in such a closed and protected and well-defined environment” as Lafayette.

Aside from her preparation to operate in the “overwhelmingly male” world of foreign service, “the manner in which [she] was trained to be a critical thinker [at Lafayette] has been essential to succeed at [her jobs in foreign service].”

She said that her advisor, history professor Robert Weiner, pushed her to achieve her full potential and was “very demanding.” Weiner said that he saw great potential in Bernicat even as a young college student and is not surprised, but still overjoyed, by the amount of success she has attained.

Bernicat got her first taste of serving abroad when she was a graduate student intern for the State Department in Liberia. However, hers was not the mundane job typically thought of intern positions.

“I arrived at Monrovia, Liberia, two or three days before the economic officer was going on leave for a month. And they made me the economic and commercial officer for the month,” she said. “So I did the work of a foreign service officer, without any prior experience in the foreign service or in the State Department.”

“It was probably about halfway through the summer I said, ‘Sign me up. I know what I want to do for a living,’” she said.

That decision to pursue a career in foreign service impacted not only the course of her life but the lives of those in the countries where she’s served. From organizing the construction of wells, to monitoring the democracy of elections, to speaking out on corruption, she said she has “never looked back because it’s been an amazing career.”

“It is up to those of us who are left to continue the thousand and one tasks [we do]…on a day-to-day basis,” she said.

Bernicat said that her staff has worked to clear up the United States’ policy on travel from Muslim majority countries, a point of concern for many Bangladeshis. Bangladesh has also been greatly affected by the Rohingya Refugee Crisis, with over 1 million refugees now in Bangladesh, she said.

She emphasized the extent of the crisis and discussed the humanitarian efforts being made in the region where the refugees are living.

“[We’re] working with other governments and [nongovernmental organizations] to provide all of the services to this population” which is living in an extremely small area relative to its size—Bernicat compared the situation to the population of Denver living in a space about 1/31st the size of the city. She added that the United States has been aiding in the effort to help the refugees, with financial, personnel and other material assistance.

Facebook has been an impactful platform for the U.S. embassy in Bangladesh, Bernicat said, with over 5.5 million followers, the second-largest following of any US embassy. Its cover photo reads a quote from Bernicat: “The U.S. stands with Bangladesh in responding to the Rohingya Refugee Crisis.”

Facebook has also been the platform on which her office has been able to clarify misconceptions about President Donald Trump’s proposed ban on travel from certain Muslim majority countries. This proposal did not include Bangladesh, but that wasn’t always clear to Bangladeshi citizens. Some of their misconceptions included that anyone named Muhammad cannot obtain a visa and that Bangladesh is one of the countries on a travel ban list to the United States.

Bernicat emphasized the importance of service in one’s life. After graduating from Lafayette, she worked at Procter and Gamble for two years at one of their manufacturing plants making cleaning liquids. A coworker once posed a stinging question: “Do you realize everything we make goes down the drain?” At this, Bernicat said, she decided to apply to grad school.

“I’ve had an amazingly rich life by being willing to go off the playbook,” she said, adding that her advice to those she mentors is often to “plan, but be open to the serendipity that can lead you to even better places than you thought you could go.”