Transparency and accountability: campus group checks facts of Farage and Fox during debate 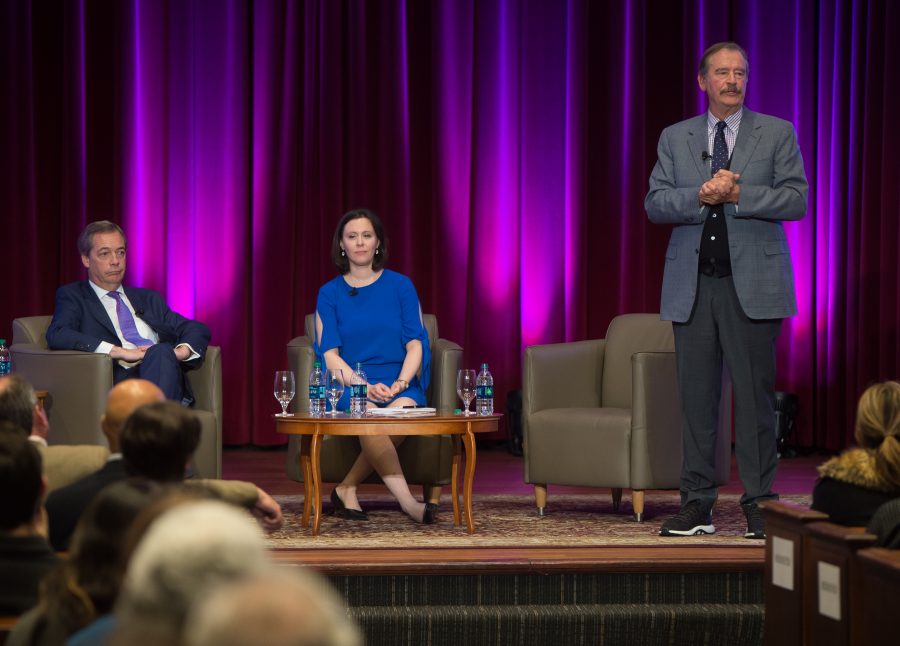 A debate on Nationalism vs. Globalism‚ featuring Vicente Fox, President of Mexico from 2000-2006, and Nigel Farage, former leader of the UK Independence Party and chief architect of Brexit at Colton Chapel on Friday. Michael Kubel / Zovko Photographic. Photo courtesy of Lafayette Division of Communications

While former UKIP leader Nigel Farage and former President of Mexico Vincente Fox were debating in Colton Chapel Friday night, a group of 21 students, professors, and librarians were anxiously working in the basement of the library, verifying or disproving the claims made by each side in an effort to increase transparency.

The group worked throughout the debate and carefully researched claims made by both Farage and Fox before assessing the validity of each claim. Once verified, a student in charge of the group’s Facebook and Twitter pages, “LaFact,” would post the result with links to evidence.

The process was thought-out and deliberate in order to try to remove confirmation bias.

“We aim to structure the research in a way that is as rigorous and unbiased as possible,” Austin Botehlo ‘18, one of the student organizers of the event, wrote in an email.

In room one, there was a live broadcast of the debate. There was a quiet intensity in this room as the students intently listened, picking out claims from both Farage and Fox and putting them into a shared Google spreadsheet. These students were known as the “harvesters.” With each claim, there was a timestamp and an assignment.

From there, the researchers in room two would begin working on researching the each claim. In order to remove any confirmation bias, the harvesters would not include attribution to the claim itself.

The researchers were broken into three teams, one of which was focused on Latin America and had team members who spoke Spanish or had more knowledge of the region. The harvesters would assign claims to one of the three teams according to their concentration.

After researching each claim, the teams would come to a consensus about how the claim should be assessed — “verified true,” “mostly true,” “mixed,” etc. — and include links to evidence.

At the time of the debate, Botehlo was in Oklahoma for a research conference, but was still actively participating as a researcher for the team.

Back in room one, fact checkers would look over the researchers’ consolidated evidence and assessment, and decide whether to send the assessment on to the social media poster, send it back to the research room, or to put it on hold until they could dedicate more time to looking into the claim. All this was done via Google docs, and without any face-to-face communication between the two rooms.

While the process was carefully thought-out and rehearsed, some modifications were made as complications came about. Professor and chair of international affairs Angelika Von Wahl and international affairs professor Caleb Gallemore, who were involved in the planning and execution of the event, were floating between the two rooms throughout the debate to help facilitate communication for logistical problems that arose.

By the end of the night, the group had posted assessments for 19 claims. Von Wahl said she was expecting to only have enough time to fully research 10 or so, and was excited to see the process worked more quickly than anticipated.

Before the talk started at 7:30 pm, the LaFact Twitter page had around 30 followers — by the end of the night the number had risen to 69.