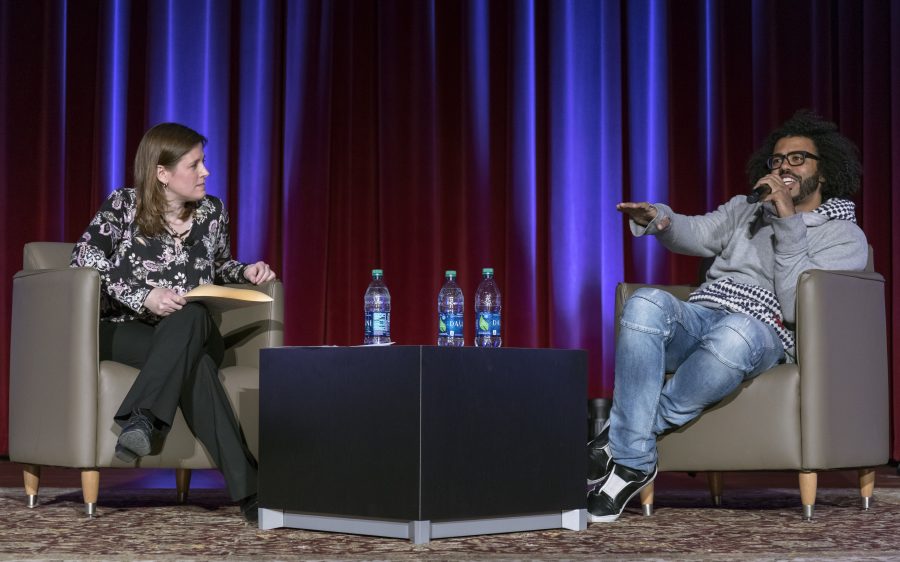 Daveed Diggs, who played Lafayette and Thomas Jefferson in "Hamilton," said that efforts to include minorities and women in the world of theater need to be "intentional." (Photo by Elle Cox '21)

Daveed Diggs was a struggling actor for eight months in New York City before he became widely known for his Tony Award-winning performance in the Musical “Hamilton,” created by Lin-Manuel Miranda, as Marquis de Lafayette and Thomas Jefferson, and his subsequent appearances in “Black-ish,” “Wonder,” “The Unbreakable Kimmy Schmidt” and “The Get Down.”

Before co-starring in one of Broadway’s biggest modern hits, Diggs said that he frequently visited New York City while attending Brown University. After graduating and going back to California, where he lived, Diggs said he decided to move to New York.

As he auditioned for roles, Diggs would “couch-surf” at his friends’ houses and found himself sleeping on trains.

“I was collecting like $100 a week of unemployment,” he said. “I had these two huge suitcases that I would leave in one friend’s house most of the time and then I would take like day bags or two-day bags or whatever, to sort of sustain me as I ran around kind of crashing other friends’ houses.”

Staying with friends didn’t always work out—for those times, Diggs said that “the 2 train was really long and overnight … not a ton of people got on it, it was like a less desirable line [for other people] so I could sleep a lot from one end to the other—that was my preferred train line.” He added, “The F is okay. And the G, if you ever caught it, was like a ghost train.”

Diggs’ was the Senior Speaker this past Tuesday. The visit was sponsored by Lafayette Activities Forum, Senior Year Experience and the Class of 1963 Speaker Endowment Fund.

Colton Chapel, where the event was held, was filled with students and faculty members eager to meet and listen to Diggs. A line formed outside before the doors opened at 7:30 p.m. Diggs charmed the audience and thoughtfully, while humorously, answered questions asked by interviewer and theater professor Mary Jo Lodge.

Diggs elicited laughter from the audience when he said, “The reality of the situation is “that your undergraduate major doesn’t matter.” He added that “the fact that you are here matters a great deal.”

In addition to doing plays in the San Francisco Bay Area for many years, Diggs used to teach poetry and be a substitute teacher. Due to a clerical error, another person, Anthony Veneziale, was also called into the same position. Through speaking with Veneziale, Diggs met with Miranda.

“I was in Hamilton due to a clerical error,” Diggs said. “That horrible job ended up [giving me] a pretty good job.” He said he was called on for the role in Hamilton because Miranda knew he was the only person who could handle the rap.

According to Diggs, working on Broadway requires one to know certain terminologies because that serves those who are aspiring Broadway actors to get ahead.

“If you start working on Broadway you’ll get into these distinctions,” he said. “They are actually very important and contractual distinctions that everyone needs to figure out because people are getting screwed based on what they’re calling a thing.”

“What they are naming a thing [depends] on whether you’ll be involved in discussions of Royalty percentage in the future, so you end up caring about the business side [of Broadway] a lot,” he added.

“I’ve done a lot of things that I’m super proud of and nobody cares [about them],” he added.

During the student Q&A, one student asked Diggs what is the best advice he has been given as an artist, for a person who has been in the business for as long as he has.

“In certain situations, you have to really trust your gut. Your instincts are probably right if you’ve been doing it for this long, you sort of know who you are and what you’re doing and what you want,” he said.

Another student asked Diggs about whether he consciously works in projects that consists of diversity or if he does so subconsciously.

“It is conscious, definitely. You have to be, at this point, particularly as you start … interacting with Hollywood,” he said. “You know when someone says to you like, ‘You know, we just couldn’t find any appropriate Latino actors’? That’s [simply] not true. You know, I can and then I do. I have to go find them for them. It’s not hard…So yeah, you do have to be active about it, I think,” he said.