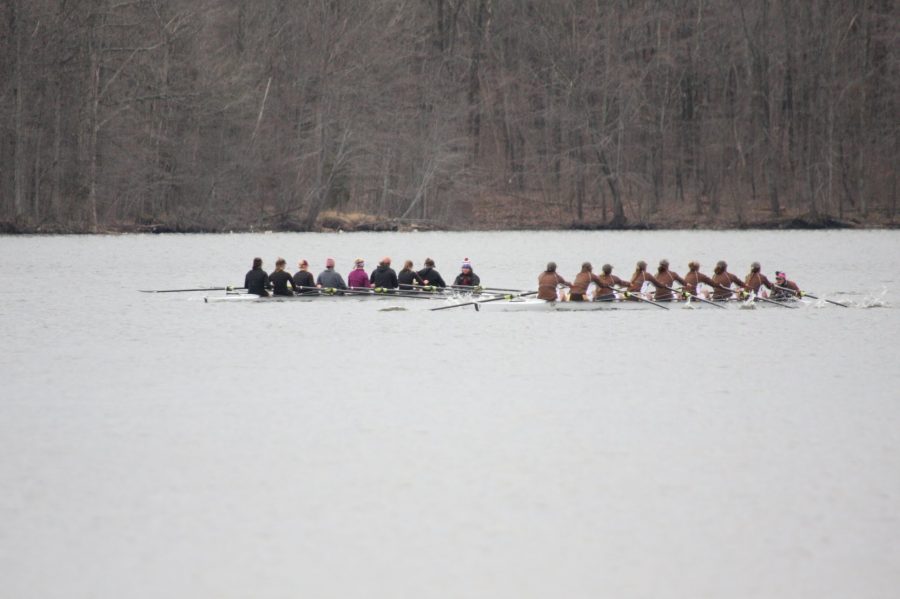 Women’s and men’s crew teams competed in the annual River Cup against Lehigh on Saturday. Lafayette dominated the 4-rower events, but fell in the 8-rower events, handing the Cup to Lehigh.

“Overall, we won all of the 4’s, and we did lose the 8’s, but we were very close,” senior club president Emily Smith said. “It was a very good race. We didn’t just let them run away with it.”

Wins in the 4’s included men’s and women’s boats, across varsity and junior varsity. According to Smith, the men’s varsity 4 has a high potential.

“The reason I’m excited to see the men’s 4 is I think it can be both the women’s and men’s 4 in the ACRA, the national championship regatta,” she said.

Despite losses in the 8’s, the team did “historically well,” according to the captain of the men’s team junior Greg Shindel.

“It was the fastest 8 we’ve ever fielded and we broke six minutes, which is pretty fast,” Shindel said. “We lost in the 8’s, which they race regularly, and they had the same boat they had last year when they won. We had new guys in this boat. All things considered, we went really fast.”

“We only race the 8 until River Cup and then we switch to small boats,” he added.

Lafayette’s performance in the 8’s made for a close competition.

“We didn’t win, but it was a fantastic race,” Smith said. “We did not let up any power. For the women’s varsity 8, we were winning for the first 500 meters, and I believe it was the same for the men. It’s not like they started out in front and walked away, we really gave them a run for their money.”

Inching closer to a dominant Lehigh team is an inspiring way to continue the season, Shindel said.

Junior varsity rowers impressed at the Cup as well, completing an overall great performance for Lafayette.

“For our JV 4, they also put down a very good race,” Shindel said. “They beat Lehigh’s 4 and kept pace with our varsity 4. It was impressive to see that come together. From what I’ve seen they haven’t raced that configuration before. To see them go in with very little experience as a crew and still win was very impressive.”

One advantage for Lafayette is the Swingulators, machines that simulate rowing better than ergometers, invented by Lafayette crew head coach Rick Kelliher.

“Our novice are doing so unbelievably well for barely being on the water,” Smith said. “I think it’s due in part to having the Swingulator, a different kind of training that a lot of teams don’t have.”

There are a few more regattas for the team before they head to the large Dad Vail Regatta.

“We have MARCs [Mid-Atlantic Rowing Conference] and we have the Kerr Cup this weekend,” Shindel said. “We’ll experiment with lineups there and use those for Dad Vails preparation. Bringing back medals from those would be a good thing.”

Smith’s 4 boat won Dad Vails in 2017 and will look to defend their championship.

“We don’t think any school has won Dad Vails two years in a row, so that would be an amazing way to end my college career,” Smith said.

As for the River Cup loss, Smith is looking towards the championship.