Diving into the world of art: a nuanced look into paintings by Pablo Pollish ‘19 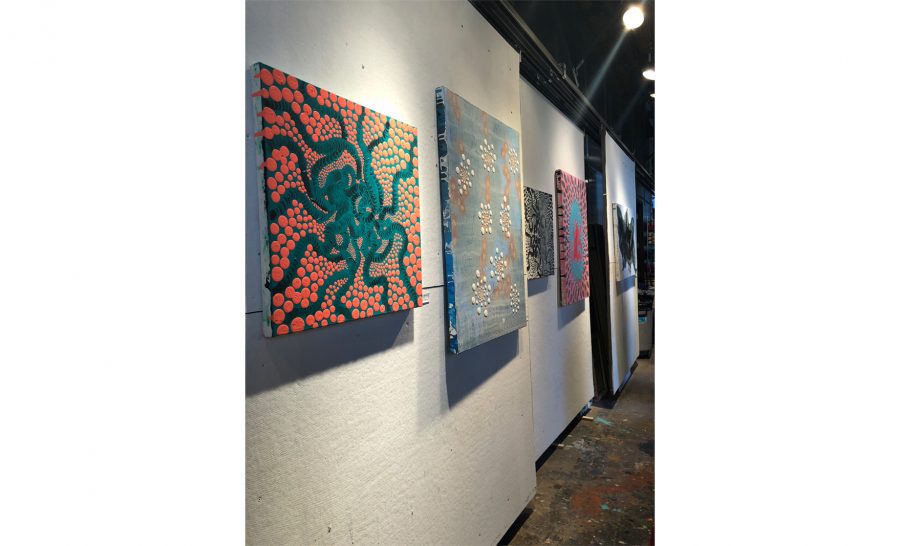 Part of being a process painter is not planning the paintings, but multilayering them to create textures, according to Pablo Pollish ’19.

“I guess the plan technically would be to make texture,” he said. “Once I have texture, then I can take the next step because that’s what the process artist is all about– it’s letting the painting tell you what to do next.”

Within a lot of Pollish’s canvases, he paints colors over each other and layers them because he goes through a process of harsh self-criticism.

“I hate a lot of the work I do. So I’ll go over it with white and try another field so that eventually [it] builds up all these textures.”

“Hold Your Breath” (2018), one of Pollish’s favorite paintings at the exhibition, is interpreted by viewers who were present at the show as “when you dive in confidently.”

Fifty-percent of the painting is for the viewer, Pollish said.

“A lot of people came up to ‘Hold Your Breath’ and said that that’s what it feels like—when you dive in[to water] confidently. You have all these bubbles just rushing past you,” Pollish said. “It’s sort of like [you’re] coming to the surface and almost like that eerie…air coming out of your mouth and seeing the bubbles escape…so it’s almost a play on confidence and insecurity.”

Pollish said that the “amazing thing” is the interpretation that viewers have of his art and art in general.

He added that he and Kerns came to an agreement about him using his art studio for his exhibition. Kerns’ art currently exhibits at the Brick and Mortar Gallery, which gave Pollish room to showcase his work.

Kerns is Pollish’s art professor, and he has inspired Pollish’s work during the summer in which he interned for Kerns.

Pollish credited Kerns for many of his works because Kerns gave him “a lot of the tools” to build his own style. Kerns ingrained in him the “different ways to structure depth,” Pollish said.

“Definitely at the beginning, a lot of my work [used] a lot of the tools that he taught me, but the nearer I got to my show the more I started to find my own style,” he said. “I’m finally being able to apply those with my own artistic style, instead of following his patterns.”

Pollish has interacted with art since he was in middle school “around sixth or seventh grade,” but this is his first solo exhibition.

“Putting [on] your own art show is scary,” Pollish said, adding that if an aspiring artist wants to be an artist, they should pursue it.