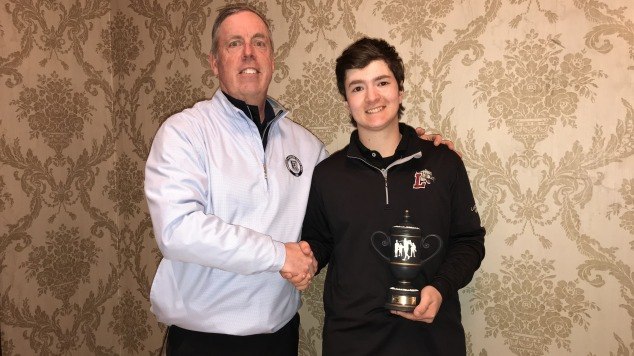 With bad weather conditions in Rhode Island, the Rhode Island Invitational was condensed to one day with two rounds on Tuesday, April 18. The team earned fifth place out of 11, led by individual tournament winner sophomore Will Halamandaris.

Halamandaris shot 1-over par in the first round and didn’t see the leaderboard before the next 18 holes of continuous play.

“When I shot 1-over par in the first round, I didn’t think I was going to be close to first,” Halamandaris said.

Going into the 2nd round, Halamandaris knew he could improve his score.

“I knew I’d left a couple strokes out there in the first round and I just went out there and tried to play the best golf that I could,” he said.

Halamandaris shot a 3-under par in the second round to improve to 2-under par for the tournament before he found he would enter a playoff for first place.

“After the second round, when one of the guys I was playing with shook my hand he said ‘Great playing today, you might be close to that lead,’” Halamandaris said. “After that, I went to check the leaderboard from the first round and saw that the best score from the first round was 1-under, so when I saw my cumulative score 2-under, I thought I might have a chance.

Halamandaris went into the playoff looking to start strong off the tee.

“Going into the playoff I was pretty damn nervous,” Halamandaris said. “A lot of people are watching. I got to tee off first and I wanted to put a ball on the fairway to put pressure on him.”

His opponent, Anthony Sebastianelli of Central Connecticut, missed the fairway with his first shot, making him take his second shot next.

“I was playing for par because he wasn’t playing the hole well, so I knew a par would either tie the hole or win it,” Halamandaris said. “I had a 5-foot putt to win it all. Standing over the ball I knew if I made the putt, I’d win the tournament,” and he succeeded.

“At first I was a bit in shock, but once it sunk in, it was an exhilarating experience,” Halamandaris said. “It was great to share it with my teammates and finally break through like that.”

The team’s fifth place overall was an impressive bounce-back performance after the Yale Spring Invitational, in which they earned 11th out of 16 on April 14.

“We as a team did well in just not worrying as much about what we couldn’t control, like the weather,” Halamandaris said. “The weather was like 45 degrees and 20 miles per hour winds. We just focused on playing our own games.”

The performance is a good one to build on, Halamandaris said, and to lead into the head-to-head match against Lehigh on Tuesday, April 24, their last before the Patriot League Championships.

“I think it’s a great notch in the belt,” Halamandaris said. “It shows that as a team we can play well, and we have it in us. It’s something to motivate us and give us confidence for Patriot Leagues.”