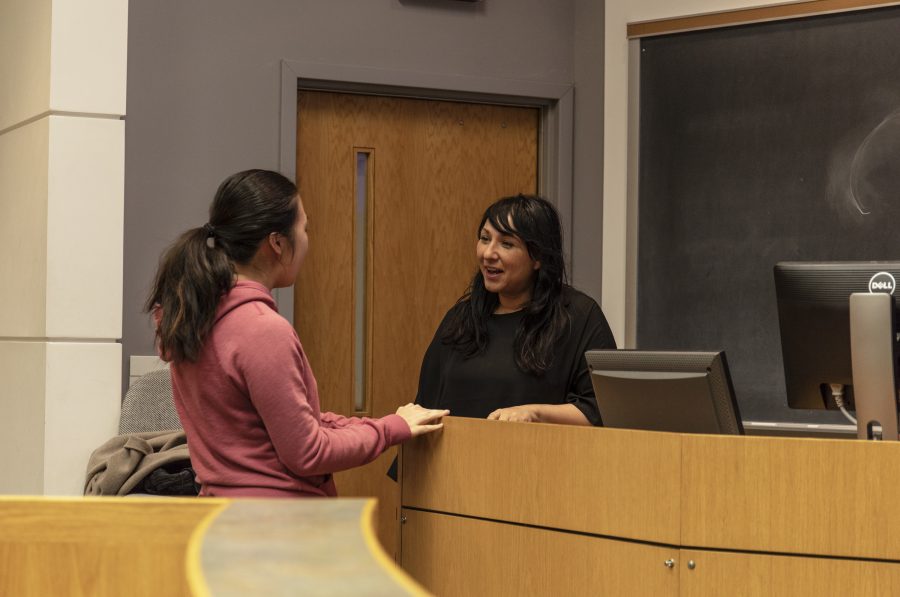 “History is a part of who we are,” Castañeda said at her talk on Wednesday (Photo by Elle Cox '21)

In a society of technology, “fake news” and a growing media, many artists find their way into journalism as a way to connect to a broader calling—a calling that lies in documenting a story and creatively expressing it to the world.

Nat Castañeda, a practicing artist and Digital Storyteller in the Associated Press, believes there is a growing conversation around creativity in journalism and the desire for artists to be a part of the dialogue. She told the audience at her talk on Wednesday not to “quit our day jobs” because artists do have a place in journalism, especially in the photojournalistic field—your passion can become your day job.

To understand how an environment can seem ultimately “boring” and lack inspiration, Castañeda described the “mundane, beige” rooms she spends her time in at the AP.

In those spaces, she manages to find excitement in the hidden gems of information she can uncover in the archive in which she began to feel like a storyteller, literally traveling through time. Creativity happened naturally around her newfound relationship with historical documentation.

Imagine the world as a giant archive of images: Castañeda believes there is creativity in the access to and searching of images in our own world—just as she searches in the AP archive.

According to her, journalism isn’t just a way to relay information to the world, it “strives to identify all sources of information” and “be fair” in that distribution, yet those constraints leave an array of new possibilities.

In a field where imagery becomes a way to complete a puzzle in a report, you must be creative in how you capture the essence to tell the story.

Castañeda ended with a response to the difficult imagery she is overwhelmed with on a daily basis.

The death of a child, torture or brutal attacks take a toll on any person who takes the photo and she described a certain detachment needed to even foster creativity with these horrific reportings.

She reminds us that there is “a human behind the media” and that there is a serious “need in this climate to present work in a more visual way” which is why she connects photojournalism to personal artistic practices.

In the end, she has fallen in love with the process of working with the imagery of our world as well as being a part of a team that reports what the world needs to know.

She believes that since “history is a part of who we are”, as humans, this calling is not a choice: “It is not about wanting to do it, I have to.”