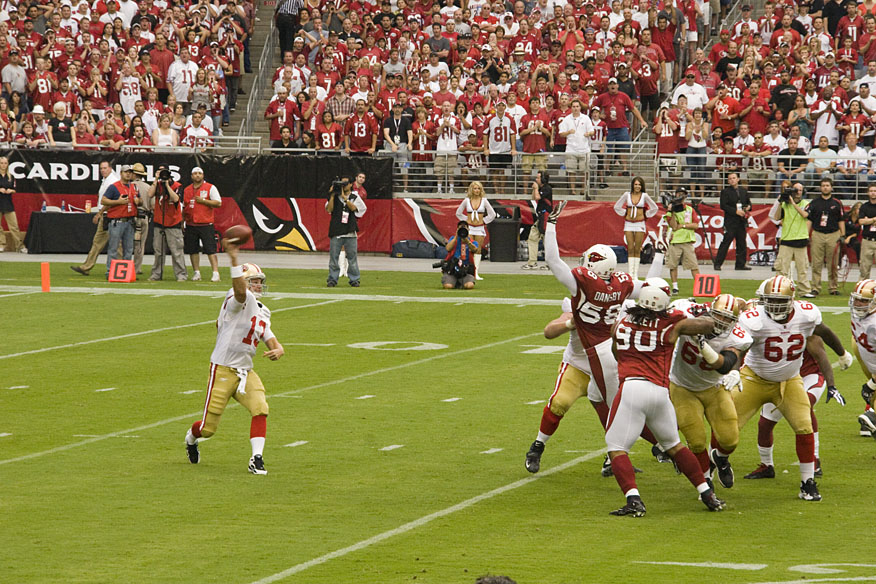 San Francisco 49ers and Arizona Cardinals are two of our writers' picks to perform better in 2018 than they did in 2017 (Photo courtesy of Wikimedia Commons).

With the NFL regular season beginning on Sunday, Sept. 9, The Lafayette sports writers make predictions for which teams will perform significantly better than they did in the 2017 season.

The Houston Texans will win the Super Bowl this year, obviously. Even though the Texans have never been to or won a Super Bowl, I have high hopes for them this season. Last year, the Texans ranked first in AFC South section, defeated the New England Patriots, the so-called “best team in the league” in the preseason, and barely lost to them by three points in the regular season not long after in September. The Texans only fell short in the regular season due to the unfortunate injuries to their rookie quarterback, DeShaun Watson, in a practice between week 8 and 9. Watson had the most passes under pressure in the whole league in 2017, and now he has come back and ready to take over the offense in the league again. On the defensive end, Texans’ J.J. Watt has also returned to the team after personal injury. Watt is one of the best defensive players in the league and with his addition to the team, the Texans will be unstoppable. Watt and Watson will lead the Texans to Super Bowl LIII.

The San Francisco 49ers are poised to make a turnaround this season. In 2016, the 49ers finished at 2-14 under head coach Chip Kelly, which was the worst record in the National Conference. The 49ers were on pace for another embarrassing season, winning just one game out of the first 11, under new head coach Kyle Shanahan. Then came Jimmy Garoppolo. After being traded from the New England Patriots, Garoppolo started the five remaining games of the season for the 49ers, going 5-0. While 6-10 is not anything to boast about, the strong showing put on at the end of the season by Garoppolo and the 49ers left room for hope. The 49ers also had some big off-season additions, like Richard Sherman and Jerick McKinnon. Although he is coming off of a season-ending injury, Sherman’s experience gives the 49ers a strong boost in defense. McKinnon shared the Vikings’ backfield last season with Latavius Murray, and came away with his best season yet, rushing for 570 yards and three touchdowns. With the promise shown at the end of last season and the new additions on both the offensive and defensive side, the 49ers have the chance to shock the NFL. While the 49ers still have pretty long odds to win the Super Bowl, they appear to be a much different team than they were at this time last year. The 49ers will also be two years removed from the reign of former head coach Chip Kelly, and what happened last time a team was two years past their Chip Kelly era? The Eagles won the Super Bowl.

It’s amazing the difference a quarterback can make. In 2015, Carson Palmer led the Cardinals to the NFC Championship game, and the team hasn’t broken .500 since. But now the Cardinals have moved past Palmer, and they’ll have Sam Bradford and recent draft pick Josh Rosen as options to lead the offense, along with a healthy David Johnson leading the ground game. The Cardinals dearly missed their star running back after he broke onto the scene in 2016 with 1,239 yards and 16 touchdowns. The reliable Larry Fitzgerald can make any quarterback look good, but could have some of his best support in years in Sam Bradford, who led the Vikings to a 29-19 win in the 2017 opener to the tune of 346 passing yards before he got injured in their second game. The NFC West is a pretty tough division, but no team is a powerhouse. The Cardinals have a good shot at being a dark-horse playoff team.