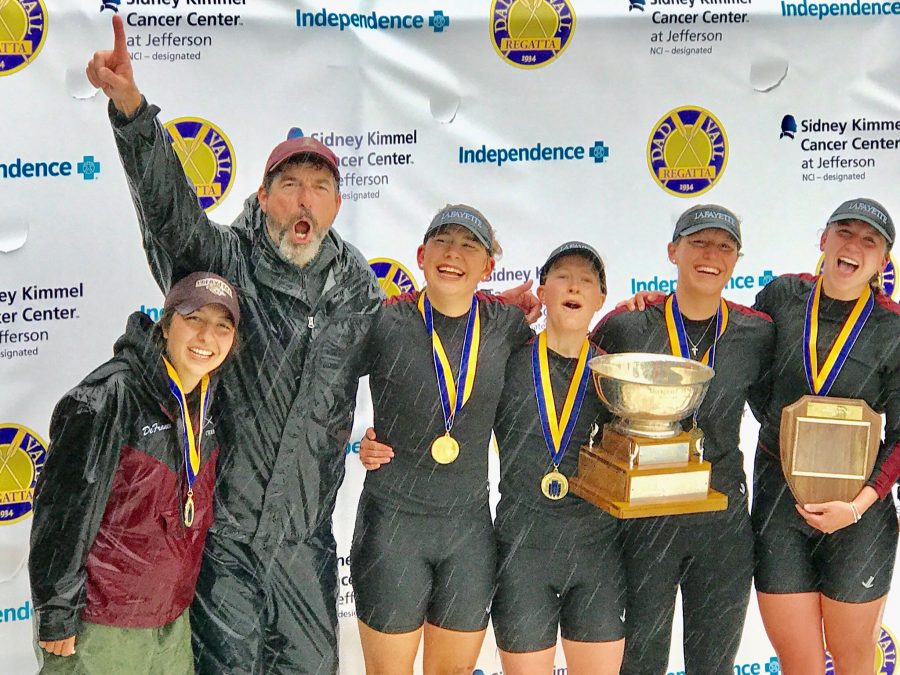 This week The Lafayette sits down with crew coach and inventor of the Swingulator, Rick Kelliher.

AJ Traub: You have experience with the U.S. National Team, schools with varsity programs, and most recently grew the program at the University of Vermont into a nationally ranked team. What was it like to bring that experience and history of success into Lafayette, being a smaller school?

Rick Kelliher: It was challenging, but very rewarding. There was a great culture already at Lafayette with the student club. I couldn’t ask for better. They’ve been successful, but I’ve been able to make them consistently successful.

AT: You invented the Swingulator. How did you come up with the idea, and what makes it so effective compared to regular ergs?

RK: The idea came when I was at Vermont coaching with UVM [University of Vermont] and they were never able to be competitive because they didn’t have enough time in the boat rowing as a unit…[since the] river is frozen half the time. I was at the boathouse and they had practice and the athletes had left. There was an old broken boat in the snow. We had an erg at the boathouse and I thought to myself, ‘There’s gotta be a way to connect that erg, that rowing machine, to the boat.’ I sat in the boat, literally in a snowbank, and I tied a rope to the handle and I sat in the boat and pulled on the oar and it pulled on the rope which pulled on the rowing machine. That’s when I started tinkering. My wife and I dragged the old boat into the gym and I brought it into their racquetball courts and we left. I came back the next day with all my tools, my welder, and metal. Everyone just assumed I had permission. After a year, I built it, I had a machine. Then we started winning. We were winning regattas because the women were rowing on my machine…It was my secret weapon. There was a competition coming up for entrepreneurs. My wife told me about it.  The guy from Merrell came up to me and said, ‘We want to build your machine.’ They invested all the money, I was the engineer, and we built a sellable product. We sold at least a hundred machines. The Chinese rowing national team bought about 30 of the 8s machines. We sold a bunch to England, Australia, Germany.

AT: You created the Swingulator after being told by the previous UVM coach that the team at UVM was going nowhere. What were the reactions there after the team medaled in regional regattas and reached some national regattas?

RK: Like Lafayette, UVM was a club team, so there was no interest from the athletic department. It never made it really anywhere except in the rowing community. They noticed, that’s for damn sure.

AT: The Lafayette crew team has earned medals at the Dad Vail Regatta and Nationals. How was the experience with the Lafayette team different than past schools you’ve won with?

RK: There is no difference. I’ve coached crews getting ready for world championships and Olympics. I have such a range of talent because they go from not knowing what they’re joining to winning regattas, it’s what keeps me going.

AT: You’ve medaled in many of the same regattas as a rower. What got you into rowing when you were younger?

RK: I didn’t start rowing until college and I got injured in high school so I didn’t have any plans to play anything in college. I saw a sign that said, ‘Come to the Rowing Meeting,’ so I did.

AT: How is the transition from medaling rower to program-changing coach?

RK: I remember when I started coaching, I was looking to train with people and I put a poster up on campus. I had transferred schools. I put up a poster saying, ‘If you’re in interested in rowing, come to room 220 at 4:30 for information.’ I didn’t put a lot of thought into it. I was 10 minutes late and I walked in and it was full of students. I looked at them and decided to start a team.  I loved it. My first race, my team won, and I thought to myself ‘I’m good at this.’

AT: What are your future goals for the team?

RK: My goal was to use the best equipment that I can. I want the students to have the best opportunity. The students do all the fundraising, so I’ve been able to do that. It’s amazing what they’ve done. We have good support from the college.  Since I’ve been here we’ve had eight crews medal at the Dad Vails as well as winning nationals, and I think that’s more than the past 40 years.

AT: What is your favorite memory so far working with the Lafayette team?

RK: My favorite memory was one specific regatta where we had a women’s lightweight four. In the final, it was us, Princeton A, Princeton B, Princeton C, MIT and BU. These are some of the top lightweight women’s crews, they’re varsity. We had an excellent athlete and three ex-coxswains. I thought we were going to get our ass kicked. I’m watching the boats come down and I saw lane two was winning, so I looked at my information and it said Lafayette was in lane two. They were getting closer and it was unbelievable, they won. Princeton rowing is legendary. The look on their coach’s face was priceless. What those women did was truly amazing.

AT: What is your favorite memory from rowing as an athlete?

RK: I play the banjo in a band.