Football drops season opener to Sacred Heart by over 20 points 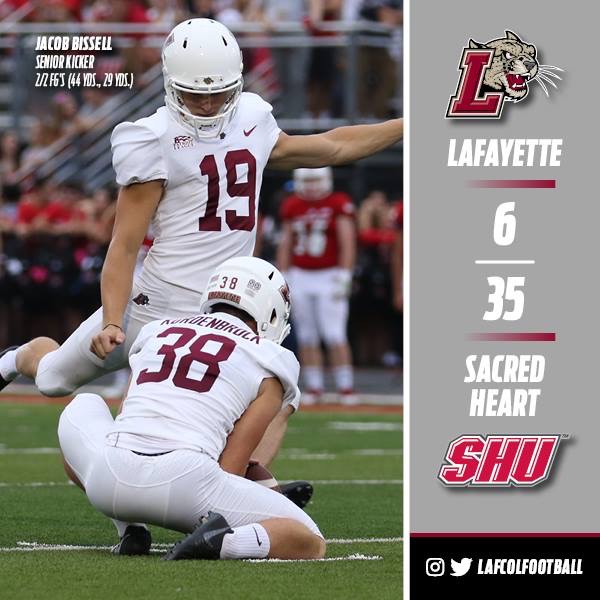 The Leopards football team opened the season with a 35-6 loss at Sacred Heart on Saturday, Sept. 2. The Leopards were out-gained 407 yards to 253 yards, as Sacred Heart amassed 261 rushing yards. At halftime, the Leopards saw a 21 to 3 deficit, with all of their points on the day coming off the foot of senior kicker Jacob Bissell. Bissell did not see action on the field last year, due to injury.

“To see the ball go through the uprights after a year was a great feeling,” Bissell said. “I wasn’t thinking anything different. I just try to tell myself to treat every kick like an extra point.”

Bissell’s kick, a 44-yard field goal, with 6:20 remaining in the quarter, went an extra 20 to 25 yards after it sailed through the uprights.

While Bissell provided a highlight for the game, head coach John Garrett spoke about a few of the areas where the team needs to improve. He said the defense needs to “get off the field” on the third down, referencing their repeated failure to stop them on third down after stuffing them on the first and second. Sacred Heart was also 4-4 with getting first downs on fourth down plays.

“It’s about what we do,” junior defensive lineman Keith Earle said. “We got to come to work and go to practice. We have to do a better job controlling our gaps and finishing the play.”
Against Sacred Heart, Lafayette showcased two quarterbacks throughout the game: sophomore Sean O’Malley, and sophomore Cole Northrup.

“It’s 100 percent the reflection of Cole Northrup showing that he is reliable, dependable, and capable of running the offense,” Garrett said. “In this day and age, you have to be able to get reps and train to quarterbacks. You can’t be left out to lurch if your starter goes down.”

Garrett sees the two-quarterback offense as one that could continue moving forward.

On Sept. 8 at 3:30 p.m., the team will face the Blue Hens of Delaware University. Delaware received ranking votes in all of the FCS polls this week.