Football shut out on the road against Delaware, records negative rushing yards 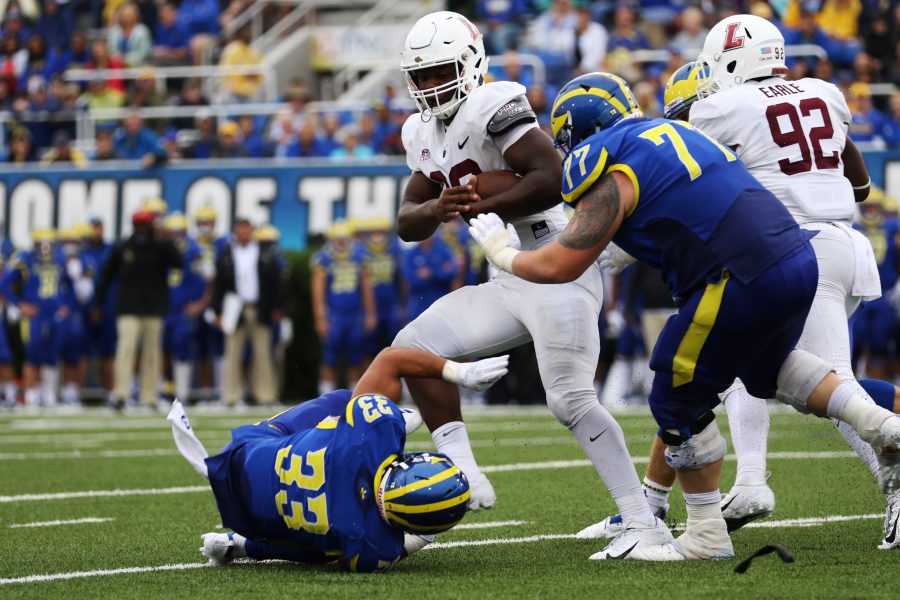 Junior Malik Hamm was the Patriot League Defensive Player of the Year in 2019. (Photo courtesy of Athletic Communications.)

The Leopards suffered a second consecutive loss to open the season, falling to a talented Delaware football team 37-0 on Saturday, Sept. 8. One week after managing just two field goals, the Leopards were limited to 118 yards of total offense and were held scoreless for the first time since Nov. 11, 2017. The loss of senior running back and captain C.J. Amill due to an ankle injury was felt immediately as Lafayette struggled mightily on the ground, registering -18 yards on the afternoon. Amill, who was a game-time decision, registered 40 yards in the season opener against Sacred Heart.

Despite Amill’s injury, head coach John Garrett says he has confidence in the team’s ability to come together as a unit, noting the strong defensive line efforts and an offense that nearly scored on a few close plays. He referenced a 75-yard pass that sailed inches past the fingertips of wide-open junior receiver Nick Pearson, who finished with 41 yards.

“It comes down to how we execute,” Garrett said. “But I saw a team that is really close to breaking out with some explosive plays.”

Quarterback Sean O’Malley led the offensive charge with 111 yards on 17 completions out of 33 passes before being substituted for fellow sophomore Cole Northrup, who also played a few minutes at the end of the season opener. It seems that the Leopards will continue to showcase a two-quarterback offense going forward, with O’Malley as the starting signal caller.

“Both guys have command of the offense,” Garrett said. “They know the system and they know the assignments.”

He highlighted “consistency and play” as two areas where the quarterbacks can improve, noting how the “accumulation of experience” as the season goes on will be beneficial to both of them.

Defensively, freshman Malik Hamm had an impactful game with five stops and an impressive forced fumble which he recovered and returned for 22 yards. He credited the veteran players on the defensive line for helping him adjust quickly to the speed of the game and for helping smooth the transition to college.

“[Malik] has natural pass rush skill, and he plays with high energy and a high motor,” Garrett added. “He takes pride in becoming a well-rounded player, and will continue to develop because of his work ethic.”

The Leopards turn their focus to Monmouth ahead of their 2018 home opener on Saturday, Sept. 15 at 6 p.m. After starting out the season with consecutive road games, the team will play three out of their next four games at Fisher Stadium. Saturday’s game will be a family affair, as Lafayette running backs’ coach Kevin Callahan Jr. will face his father, Kevin Callahan, who is the head coach of the Monmouth team. Saturday is also Youth Day at Fisher Stadium, which means free cotton candy and $1 off ice cream for all kids 13 and under.