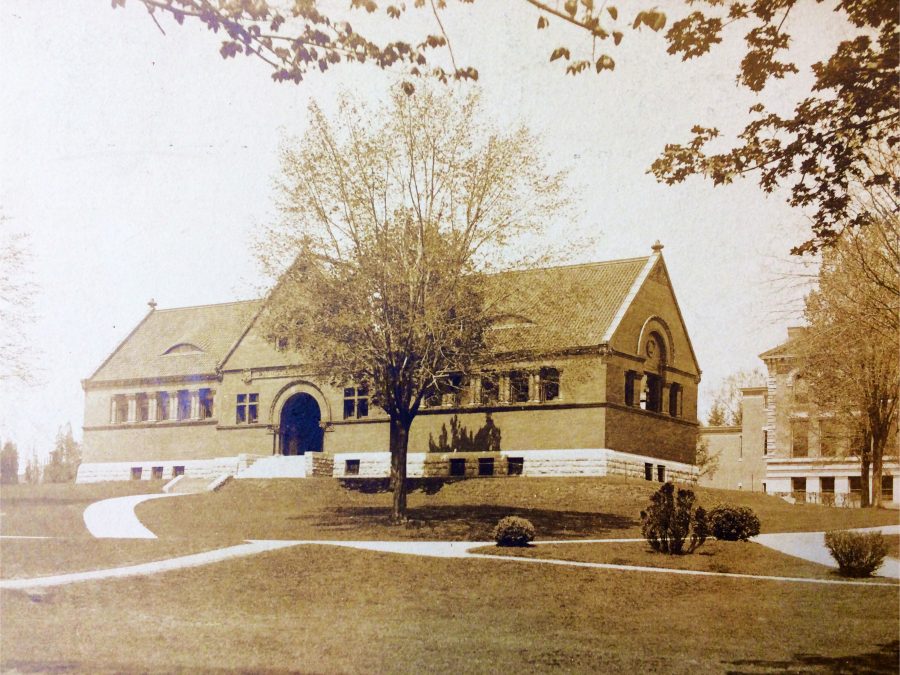 Van Wickle, which today proudly boasts its rocks and mineral collection to the campus community, once boasted its collection of books as Lafayette College’s main library.

Today, Van Wickle, previously known as The Van Wickle Memorial Library, is the home of primarily the geology department, as well as environmental sciences and environmental studies. The historic building with its unique architecture was erected in 1899 as the college’s library. It served as the library until Skillman Library, built in 1963, became the new home for students’ studies in 1964.

The building was named after Augustus S. Van Wickle, who died on June 8, 1898. According to an artifact from Skillman Library’s special collections, the college received $30,000 for the erection of a Memorial Library Building according to Van Wickle’s will.

Van Wickle’s donation to the school in his legacy was not out of character. He was the son-in-law of the late Ario Pardee, Esq., the benefactor of the college. The trustees decided that the building should be erected under the direction of Van Wickle’s executor, his wife, who was responsible for some of the design aspects of the building, and I.P. Pardee ’74.

While it no longer houses the shelves of books it once used to, the marks of its old function are still visible.

“You can tell Van Wickle is a library because it has terracota books in the upper parts of [it’s facade],” Director of Special Collections Diane Shaw said.

Van Wickle was proposed to be dedicated as the library building of the college on May 30, 1899, according to the college archives. The ceremony included a formal presentation and acceptance of the building, addressed by Dr. Ernest C. Richardson, librarian of Princeton University at the time. The address was delivered in Pardee Hall, followed by a day of activities that took place on the steps of Van Wickle. After the ceremony, the building became open to the public.

Shaw said that when Skillman Library opened and became the official college library, all books were moved out of Van Wickle.

“The Van Wickle building became home to the Geology department. Geology, as well as mining engineering, had originally been taught in Markle Hall. There were lots of building shifts at time,” Shaw said. “In 1964, [college officials] outfitted Markle to become the administration building, so they needed a new home for the Geology department at that point and decided to make Van Wickle its new location.”

Those who have been in the Rothkopf Reading Room on the second floor of Skillman may have noticed the large, colorful glass artwork on the back wall, representing Sir Philip Sidney, an Elizabethan poet. According to the archives, this glass mosaic is actually a Tiffany and Company window that was ordered by the wife of Van Wickle and once served as decoration for Van Wickle’s reading room, which now serves as the building’s computer lab.

Throughout the years, members of the Geology department have added an interesting museum of rocks and fossils on the first floor, that have come to serve as a hallmark of the building.

“They’ve made significant editions in recent years and have a wonderful mineral collection. They always had a good collection of minerals and rocks from the earliest days of the college, so they wanted to make them visible to the campus and use them for educational purposes,” Shaw said.

One significant addition that the department has made to the building is a shallow-bed recirculating flume. The flume was purchased around 18 years ago with a $300,000 grant from the W.M. Keck Foundation. It measures 37 feet long, 6.5 feet wide and 2.5 feet deep. It can hold 3,500 gallons of water and is used for several student research projects and courses.

While you won’t find a flume in Skillman Library or literary research materials in Van Wickle, both buildings have evolved over the years to serve the needs of the campus community, through both material and minerals alike.