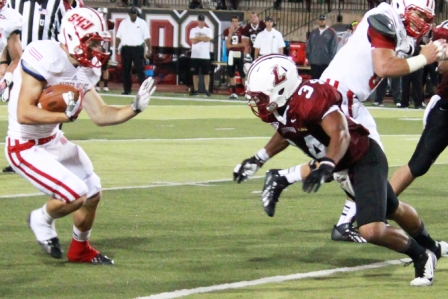 Linebacker Dion King ‘14 will return for Lafayette this weekend

“It was a very good week from a medical standpoint,” Tavani said from the get-go.

Offensive lineman Max Ngolla ‘15 returns after suffering an injury against Sacred Heart in the season opener. Ngolla will be welcomed back with open arms to help pave the way for a rushing attack that has averaged just 82.7 yards per game.

And after utilizing three fullbacks as tight ends against Sacred Heart, Tavani was particularly eager to announce the return of sophomore tight end Brian Keller, who will provide an “added dimension” to the group. Senior tight end Brandon Hall is now completely healthy.

Quarterback Zach Zweizig ‘15 will not play after suffering a concussion against Penn. He did not participate in any football activity for the past two weeks, including meetings. He was able to attend class, though.

Next in his recovery timetable is for doctors to see how he responds to running and various exercises.

Starting in his place is sophomore Andrew Dzurik, who completed 12 of 22 passes for 157, no touchdowns and two interceptions against Penn. Dzurik did lead two fourth-quarter touchdown drives to bring Lafayette within six in a 27-21 loss.

“He was very cool, calm and collected,” Tavani said on Tuesday. “He’s ready to step up if he is to be the starter. We have no reservations about that.”

When asked whether he thought Wesley would play, Tavani cut right to the chase.

“We are fully expecting [him] to play,” Tavani said. “We feel strongly that there are several players that they held out that they could have played last week to prepare for the first league game.”

Tavani continued along explaining what he thought of the “questionable” classification.

“Who knows?” Tavani asked. “I could be making up a story about Zach too. You know me better than that though. What I’m saying is exactly how it is.”

“I was an altar boy as a child and I try not to do that.”

Immediately following the loss against Penn, Tavani gathered his team and shared his thoughts.

“It’s one thing to be 0-3 and around a bunch of people who don’t care or have a bad attitude,” Tavani said. “But there’s not one ounce of that out of this football team. There is not a better group of young men I would rather be around right now.”

“We would be fighting for our lives just like if we were 3-0.”

Making plays when it counts

To win its first game this season, Lafayette must make plays in the late stages of the game. Against Penn, a dropped ball from wide receiver Justin Adams ’15 on the final drive could have made all the difference.

“Players tend to make a bad play and then get down on themselves,” wide receiver Demetrius Dixon ‘15 said. “To make the big plays you need to go out there and have fun. We practice all week to get the basics down, the technique down, to know what you’re doing.”

When asked the same question for the defense, defensive lineman Darius Glover ’14 replied, “[Demetrius] stole the good answer with fun.”

“Defense is getting the assignments right, not making mental errors and hustling every play,” Glover said. “Try to black out all of the outside noise. The physical side is there.”