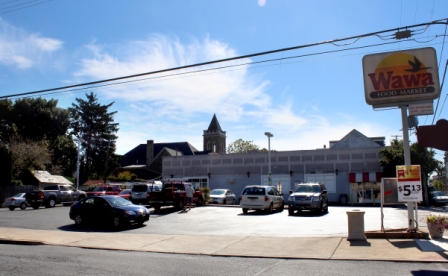 A fight occured at the Wawa on the corner of Cattell and High Streets at approc on September 22nd.

Photo by Austin Drucker ‘17 | The Lafayette

Joey Pannullo ‘14 was assaulted in the Wawa parking lot on Cattell Street by three men after sticking up for female students on Sunday, September 22, around 2 a.m. Pannullo suffered a concussion, two black eyes, two broken ribs, and a lot of bruising and soreness.

The three men have yet to be caught. They fled the scene when the authorities were summoned according to a Lafayette female senior, who witnessed the incident. Easton Police told Pannullo that if caught, the men would end up with a misdemeanor, since the assault was unarmed.

Repeated calls to the Easton Police Department to obtain arrest reports were not returned.

Upon exiting the Wawa, Pannullo saw the men catcalling and yelling inappropriate things at female students who were walking by.

“I took offense to what they were doing because I don’t think you should ever yell at a girl. Period,” Panullo said.

Pannullo approached the men, asked them to stop what they were doing, and they turned on him.

When Pannullo woke up in the hospital, he barely remembered anything. “I had to slowly piece things together to figure out exactly what happened.”

A senior female witness rounded the corner of Wawa just as this was happening.

“I saw two guys beating someone up and a third just watching,” she said. “I didn’t know who it was but I just saw someone literally getting kicked in the face. No exaggeration.”

“It was just bad timing and bad luck,” she added. “Usually Easton police and Public Safety are at Wawa on Saturday nights, but unfortunately, they weren’t there that night.”

“I’m concerned if this starts becoming a trend – I am worried for others,” Pannullo said.

“I would have done the whole thing all over again because I don’t know what would have happened if I didn’t.”