Panel of educators and experts discuss future of higher education 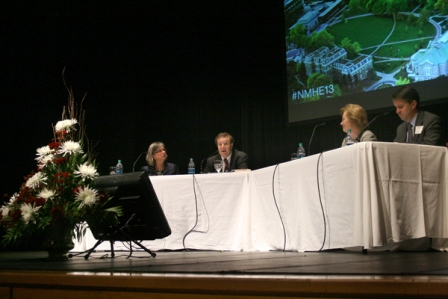 Photo by Nicole Maselli ‘14 | The Lafayette

Higher education is changing, and colleges need to change with it.

Panelists at the round table discussion entitled “The New Models for Higher Education” agreed that the landscape of higher education is different and the future has much in store for competitive residential colleges such as Lafayette.

The panelists included Elizabeth Boylan, director of STEM education programs for the Alfred P. Sloan Foundation, Steven Poskanzer, president of Carleton College, and Jeffrey Selingo, editor-at-large for The Chronicle of Higher Education. The three panelists were moderated by Lafayette’s own Provost and Dean of the Faculty Wendy Hill.

Poskanzer began the discussion by focusing on the importance of attending a residential college for the sake of learning practical skills, such as encountering diversity, learning from those of different backgrounds, accepting accountability, and learning to cope with roommate issues, joking about different standards of cleanliness. Other benefits include preparing for citizenship and receiving a high quality moral education, as well as students figuring out what most to them and who they want to strive to be. Poskanzer also raised the question of whether a four-year model is absolutely necessary and whether it is still going to be the way of the future. According to Selingo, tuition is going up and families’ incomes are stagnating, which could lead to lower matriculation into four-year colleges.

“The last decade was marked by this idea of going to any college at any cost, and I think the future is really going to be about value and picking colleges based on this value conversation,” he said.

Selingo expects deeper alliances between colleges, especially those that are struggling on their own, in the future.

Alliances between schools resonated with Boylan. While Provost and Dean of the Faculty at Barnard College, Boylan was part of the Alliance to Advance Liberal Arts Colleges (AALAC), which consisted of a group of 23 liberal arts schools. She noted how educational it was for the faculty of the different schools to get together and discuss different approaches. She also discussed the importance of STEM education: science, technology, engineering, and math. Lafayette recently received $27.9 million to support a science and technology building.

In 2008, Selingo said, 81 percent of students said that college was a good investment. In 2012, only 57 percent said college was worth the cost.