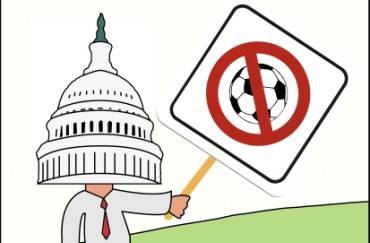 Rare to think that a political stalemate in Washington, D.C. would have any bearing on a Patriot League men’s soccer game, but that is exactly what happened last Saturday.

The Lafayette-Navy matchup was originally set for October 5 but postponed until October 16 due to the heavily publicized shutdown of the federal government.

Lafayette (3-1-6, 1-1 PL) had high hopes for redeeming itself against the Midshipmen (4-3-2, 2-0-0 PL) after losing its first Patriot League contest against Colgate. Instead, Lafayette focused its attention on archrival Lehigh (1-6-1, 0-3-0 PL) and that preparation paid off.

On Wednesday, Lafayette traveled to Bethlehem and left with a 1-0 victory. Peter Adubato ‘14 jumped for a 50-50 ball but was knocked down from behind and awarded a penalty kick, which he put past the Lehigh goalkeeper.

Leopard goalkeeper Nathan McDonald ‘14 made two saves for his fifth shutout of the season. He is now in sixth place on the all-time shutouts list with 16, passing Mike Tortora ‘06.

For Coach Dennis Bohn and his squad, it was a nice break after partaking in seven double overtime matches thus far.

Since the end of the government’s fiscal year on Sept. 30, a Congressional melee over the institution of the healthcare law dubbed ‘Obamacare’ has resulted in a forced furlough for all “non-essential” federal employees. It is estimated that more than 800,000 government jobs have been temporarily eliminated in the wake of the political struggle.

The shutdown has forced the nation’s service academies to call off one collegiate game after another. One of the many events in jeopardy was the annually sold-out football game between Navy and Air Force, which was played only after United Services Automobile Association, an insurance company that caters to members of the military and their families, privately picked up the $230,000 bill for the transportation of the Air Force football team to Annapolis.