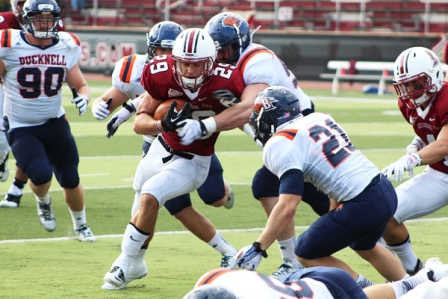 Running back Ross Scheuerman had a career day against Bucknell on Homecoming, rushing for 188 yards and two touchdowns.

If you were to look back at a calendar prior to Homecoming weekend, you would find that the last win for Lafayette football was October 20, 2012 against Holy Cross. That fact alone makes this past Saturday’s 31-7 victory against Bucknell that much more important.

“You find out a lot about yourself as a head coach, your staff and your young men when the chips are down,” Head Coach Frank Tavani said at Tuesday’s media luncheon. “Fighting back from that you get that good feeling from getting a win.”

Tavani was quick to note that the win does not solve all problems.

“We still need improvement and have a lot of work to do.”

Following each game, Tavani and special teams coordinator Doug McFadden sit down and name a special teams captain for the next game. This week, it was freshman punter Ryan Forrester.

“He has just been outstanding,” Tavani said. “[Bucknell] returned just one punt and that’s because of the height of the punts.”

He will walk out for the coin flip tomorrow against Princeton. Of his 20 punts this season, just four have been returned. Kickoff returner Matt Smalley ‘16 and placekicker Ryan Gralish ‘16 have been the other two special teams captains this season.

Princeton averages 557.3 yards per game, ranking fourth nationally in the FCS and first in the Ivy League. Last week, the Tigers gained 629 in a 53-7 win against Columbia. A week earlier, Princeton won 50-22 against Georgetown.

“Anytime you put 103 points on the scoreboard over two games, that will leave your defensive staff and the head coach without sleep,” Tavani said. “To say they’re on a roll is an understatement.”

A loss tomorrow would be the seventh straight to Princeton.

Lafayette is suffering from a bit of a concussion problem. Headlining the injured group is quarterback Zach Zweizig ‘15, who missed the Bucknell game after suffering a concussion against Penn two weeks prior. He was evaluated again on Monday and at the time had not been cleared for the initial test of exercise without equipment.

Junior offensive lineman Ben Jeannot is day-to-day with symptoms. Defensive back Damarcus Ingram ‘15 suffered a concussion as well but symptoms did not set in for a week. Additionally, senior defensive lineman Jake McTighe “came up sour” with the same situation after five days, according to Tavani.

Junior defensive lineman Tyrus White had quite the day for himself against Bucknell. White racked up six total tackles, included three sacks, as well as one forced fumble that eventually led to a Lafayette touchdown.

Asked by a reporter if it was the moment he was waiting for, White said, “Well I was and I will continue to do it all season.”

Tavani stepped in: “Man of few words. He doesn’t have to say too much he just has to get to that quarterback.”