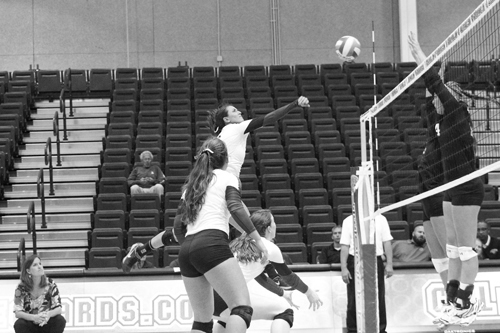 Senior Karissa Ciliento sends the ball over against Lehigh on Oct.18. Despite being 3rd in the Patriot League in digs for the season, the team has dropped to almost dead last in kills and blocks with 735 and 26 respectively.

Michael Kelley
Photo by Austin Drucker ‘17 | Photographer
On go the Patriot League woes for Lafayette volleyball. Winners of just one of its past nine league matches, Lafayette (9-11, 1-8 PL) is looking for any sort of solution to salvage its season.

That attempt begins today against Navy (8-12, 4-4 PL) in the Kirby Sports Center at 7 p.m. The comforts of home have been clear for Lafayette, as it is 0-5 in road games and 7-5 in front of its home crowd.

The Leopards had five days to step back and review what has gone wrong thus far. Last week – end, they lost to Lehigh (15-6, 6-3 PL) in a five set thriller on Friday and then to Colgate (16-6, 8-1 PL) in straight sets on Saturday.

Lehigh and Lafayette traded opening sets before the Leop – ards won the third set 25-19. The Mountain Hawks then responded in a way not often seen, winning the fourth set 25-3. Although Lafayette responded positively in the fifth and final set, Lehigh prevailed 15-11 to win the match.

Perhaps the layover from the loss the night before affected Lafayette against Colgate. More likely, it is the fact that Colgate sits comfortably atop the league and has shown no signs of slow – ing down.

Colgate, the defending league champions, won comfortably in 25-15, 25-12 and 25-14. It is the sixth time this season Lafayette has lost in straight sets.

Following the Navy match tonight, Lafayette will travel to Hamilton, NY for a rematch against the Raiders. The Patriot League Tournament is hosted at the site of the highest seed, which is currently Colgate. The top four seeds from the league compete for the title.