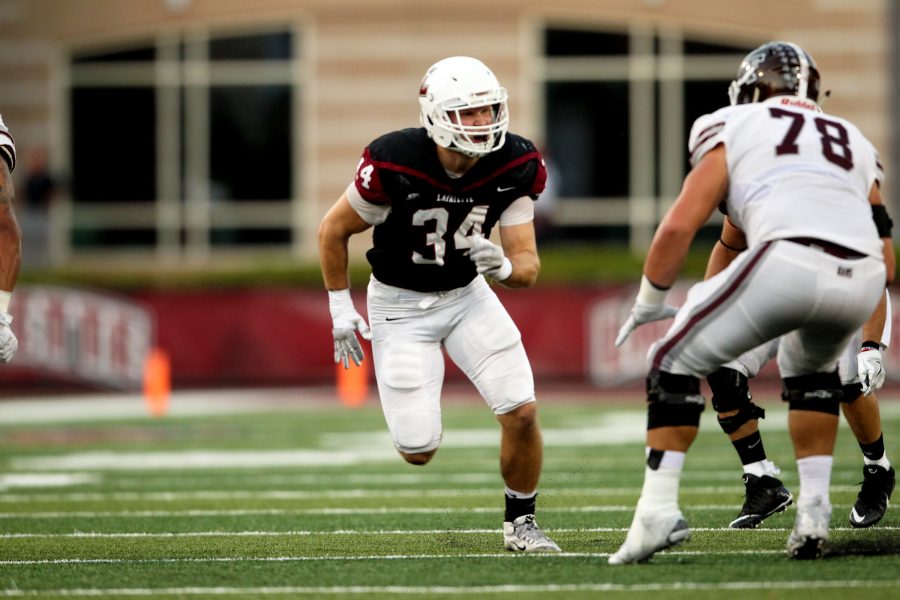 "I think finally getting the first win...shows our team’s ability to overcome adversity," Andrew Chuma said of the team's triumph over Central Connecticut State.(Photo courtesy of Athletic Communications)

Natalie Mogul: Do you think that this past win on Saturday [Sept. 29 vs. Central Connecticut State] was an indication of an upward trajectory for the team this year? How will the team use the win and bye week to improve for the Georgetown game?

Andrew Chuma: I think it’s definitely an upward trajectory for us. If you look at all of our games thus far, we’ve been coming so close and improving as a team and that’s what [head coach John] Garrett has been reiterating to us: just becoming a good team rather than looking at the wins and losses. I think finally getting the first win under your belt is a big thing and I think it shows our team’s ability to overcome adversity. Given this perfect placement of the bye week, right in the middle of our schedule, it’s nice to be able to have this to reset and put the first half of the season behind us and the rest of our season has most of our Patriot League play. It’s nice to be able to have two weeks to be able to prepare for our Georgetown game.

NM: What made the difference in the win against Central Connecticut [State]?

AC: I don’t think we necessarily changed anything. The biggest thing looking at this game was being able to continue to perform to our level and standards. We finally executed on all phases: special teams, offense, and defense, whereas other games, [only] some phases would perform well. It was big to have all three phases come together and click.

NM: You were named a semifinalist for the National Football Foundation Campbell Trophy, what does that mean to you?

AC: The award is a National Scholar Athlete award. What it comes down to is your ability to be consistent on and off the field. It’s cool to be able to see a pool of candidates where there are a lot of athletes with excellent GPAs, are all-conference, have a lot of different talents and have their efforts recognized.

NM: What has helped you along the way, achieving academic and athletic success?

AC: Being an athlete, although it is a big time commitment, it can work in your favor, since the sport gives a lot of structure. There is only a certain amount of time to have things done. After classes your day isn’t over, there is class and then practice. The structure forces you to look at your day and know what you have to do and the amount of time you have to do it. Your day ends up being really efficient and goes by really quickly. Forming relationships not just with players and coaches, but also with professors and classmates, is huge because they help a lot on the academic side.

NM: How did the team rebound from the early season losses to grind out a close game win?

AC: Nothing was really changed. We continued to be the team we are and it finally paid off.

NM: You’re the Executive Director of the Money Matters program sponsored by the Boys and Girls Club of Easton. What is your role in the program and why do you do it?

AC: My freshman year I met with a former Lafayette football player Maurice Bennett [’06]. I was shadowing him about his job at a bank in New York City. He mentioned that he participated in a program with the Boys and Girls club and that he would go once a week to the club and teach about finance, [which was] what he was studying at Lafayette. He recommended emailing, so I did. I did it to have something to do outside of football and school. During my sophomore year, we would have a group of about 15 kids every class and we would teach them about different topics in finance and would play stock games with them and would make it fun. Since then, I’ve gotten to know the directors and have been able to host football clinics at the club. They came to a game last fall and I’m sure they’re going to come to a game this season.

NM: What’s been one of your favorite moments of your career with the team?

AC: The Lafayette-Lehigh games are always fun. It’s a really big deal to everybody on campus and I love being a part of that.

NM: Are you superstitious? Is there any routine or ritual that you do before games?

AC: Not really. Every game day is different because of the time of it. Each weekend the time of the game changes. I don’t necessarily have a superstition, but one thing about me [is] I’m very routined about what I do. Before [every game], I will always stretch and workout. I like to get sweaty before games.

NM: Who is your favorite athlete?

NM: What’s a fun fact about you?

AC: My freshman year I did an internship at Vineyard Vines and they featured me in the back to school catalog. I like to call myself a model.