Who will it be? 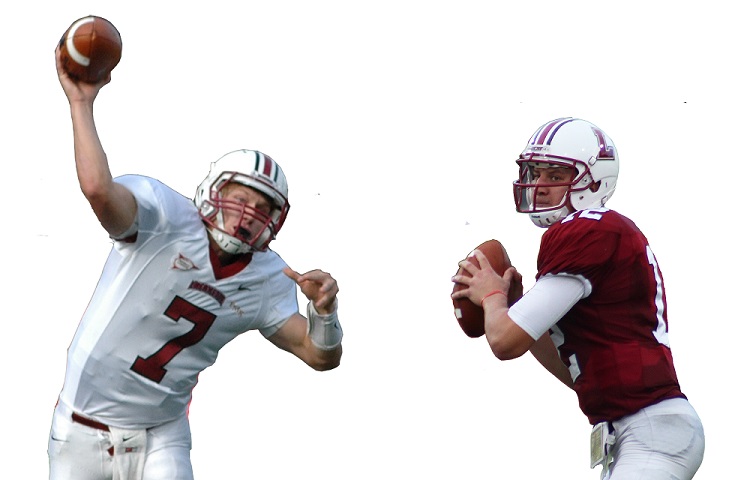 Head Coach Frank Tavani has a quarterback decision on his hands. And just minutes into Tuesday’s media luncheon, Tavani was asked the same question that has been on his mind all week: who will it be? Andrew Dzurik ‘16 or freshman Drew Reed?

“It’s important that individual knows as soon as possible that they are starting,” Tavani said. “Whether I make that public or not is a different story.”

Lafayette is 1-5 and must find an answer at quarterback with five games left in the season, beginning tomorrow against Holy Cross in Worcester, Ma.

“This is the part of the season that certainly means the most,” Tavani said. “We certainly hope we have some good fortunes this time around.”

Those good fortunes will be easier to come by with strong quarterback play. So, the question that begs to be answered must be asked again: who will it be? Who will Lafayette turn to guide it through the thick of the league schedule?

One option is surely not Zach Zweizig ‘15, at least not yet. Zweizig suffered a concussion against Penn on September 21 and has not participated in any football related activities but began riding the exercise bicycle on Tuesday.

“Out of the deep dark cave comes Zach Zweizig,” Tavani said. “That’s the first step toward getting back. He’s been out so long now that he might need a couple of weeks of practice to get his timing back.”

Lafayette must now turn its focus towards winning a Patriot League Championship after a poor non-conference schedule, a feat very much still alive, especially with one league win already under its belt.

“In the beginning of the season, we set a goal to win the Patriot League Championship,” center and captain Pat Crosby ‘14 said. “Everyone on the team knows that it is still in front of us.”

Tavani put it this way: “That is why they say rear view mirrors are small and the windshield is much bigger.”

History is mixed. Lafayette last started 1-5 in 2010 and ended up finishing 2-9. In 1994, the Leopards lost their first six games but won their next five en route to a league championship.

“It’s not the start we wanted to get off to,” senior receiver Mark Ross said. “But we were so excited this week in practice you would think we were 6-0. We want to save and salvage this season and win a league championship.”

For Ross, it was never about the records, at least not initially. It was about accomplishing his series of goals he laid out one step at a time.

“My first goal when I came to Lafayette was to play,” Ross said. “Then to start… then to be the number one receiver. When I came here initially, I never thought about breaking the records.”

“I’m excited to have that opportunity now.”

To surpass John Weyrauch ‘04 who is atop both lists, Ross needs 2 receptions and 149 yards.

“It’s something that has been on my mind but I have always tried to stay healthy and play my game and then the records will come,” Ross said.