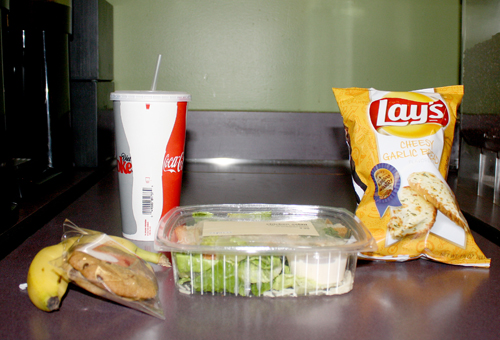 An email sent by Lafayette Dining Services announced no changes will be made to meal equivalency this year, contrary to popular belief.

According to the email sent by dining services, the meal equivalency program was expanded this year.

“In both the Food Court/Lower and in Simon’s Café, as a meal equivalency, students can now get virtually any entrée offered plus any four items of the following to complete a meal, including a beverage, fruit, chips, coleslaw, potato salad, pasta salad, and dessert,” read the email.

There have been discrepancies among students about what they can purchase using meal equivalencies.

“I have heard probably five versions of what our meal equivalency sign says,” Joe Blice, general manager of Lafayette dining services, said. “The stories that we hear are so bizarre and they never started with Bon Appetit.”

One example of the misinterpretations comes from the “Food Movement” Facebook page. A student inquired about “sudden, unannounced price changes” in Lower Farinon, and a commenter replied, “You can only use a meal on items deemed ‘Meal Equivalency.’ Anything that is not meal equivalency, you have to use pure flex, cash, or credit.”

Students have expressed their frustrations about the supposed changes in meal equivalency.

“They were upset,” Alisha Zona, Lower Farinion worker, said of students when she explained to them the meal equivalency. “I just know they said they were going to contact the president and they’ll make a big deal about it,” she said.

There may have been some miscommunication about the meal equivalency policy, according to Blice.

“There was one of our cashiers in Lower, and to this day I don’t really know if she was giving out wrong information or if she didn’t really understand what the program was,” Blice said. “Whatever she said, or whatever she is accused of saying, that started to turn this tide. And then some point I’m like ‘We have to do something,’ because there are so many stories about Lower and meal equivalency.”

New signs will be developed to make the range of options for meal equivalency more apparent.

“Personally, I think that mealing everything is great. I save so much money, but I’m definitely jipping the school,” Marcia Molettieri ‘14 said.

The email stated a goal of the dining program “is to promote community through sitting together with fellow students for meals.” Blice noted that eating at the dining halls is not always as convenient for students as Lower.

“If they’re trying to make it so more people eat in Marquis and Upper, then they should increase the seating in those areas because it’s already hard enough trying to find seating in these dining halls,” Alex Fetter ‘16 said. “Also, as a result of the change, people with leftover meals at the end of the semester are going to be screwed because they won’t be able to use meals on cases of water, soda, et cetera like we used to be able to do.”

At the beginning of the semester, students were not able to use meal equivalency at Gilbert’s as they could under Sodexo. Blice said dining services is returning to the same meal program at Gilbert’s as last year’s.

“We want to be the best partner on the community and part of this community as we can,” Blice said.