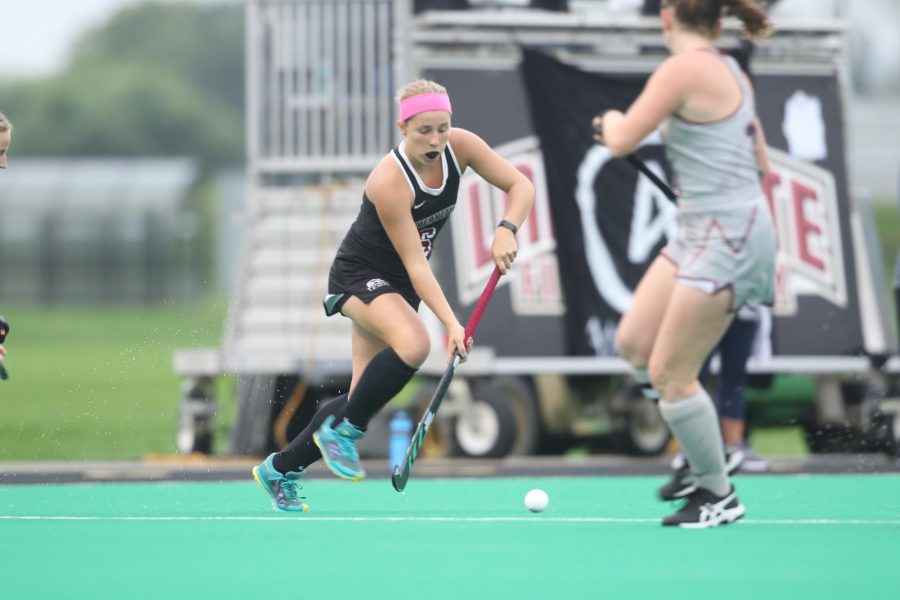 Field hockey made a major statement with a win over nationally-ranked Penn. (Photo Courtesy of Athletic Communications)

The Lafayette field hockey team has been on a roll, working their way to a four-game winning streak that ended in a recent match with Providence. The recent surge brought the team to 6-9 on the season, along with a strong 3-1 conference record. For their third win in the four-game win streak, Lafayette took down top-20 nationally ranked University of Pennsylvania in a dramatic match on Monday, Oct. 8. Coming off a pair of road wins against Villanova and conference rival Colgate, the Leopards won 2-1 at home Rappolt Field.

Penn struck first and early, netting one of their 11 shots past junior goalkeeper Sarah Park at 8:58 into the game. Park wrote that the team wasn’t fazed by the early score by the highly-ranked team.

Park emphasized that despite the early strike, the team never “thought [they] were out of the game from that one goal.”

Park and the Leopards defense saved all five other shots on goal for the rest of the game, with Park recording three saves and the other two saved by senior defender Rachel Bird.

“The team was absolutely crushing it, so the biggest thing for me was to do my part and do my job in return,” Park wrote in a text. “I think having our defensive unit collectively remain composed really helped me continue to have confidence to keep the ball out of the cage after the first goal. Something we talk about on the team is ‘good players make other players look good’ and that’s exactly what my team did for me.”

The first half finished with the score still at 1-0 in favor of Penn. The Leopards changed that quickly in the second half, equalizing the score on a goal by junior defender Lisa van der Geest just 7:29 after halftime.

“At halftime we talked about attacking opportunity, and that we had capitalize more,” van der Geest said. “We were there, but we weren’t taking advantage of our opportunities yet. My goal came off of our attack penalty corner [APC]. Our APC unit has been really strong the past couple games. We knew one APC could be enough to potentially tie the game.”

The attack penalty corner, or a pass from the back line out to waiting attackers outside the arc where the defenders are outnumbered due to a defensive penalty within the arc around the goal, is an important play which van der Geest said is a big point of improvement for the team during their winning streak.

“We scored four out of five goals against Villanova off of APCs, we scored two out of five against Colgate [off APCs], and [against Penn, it] was one out of two [goals off APCs],” van der Geest said. “We had one APC and Penn had ten. That makes a huge difference for us.”

“The tying goal gave us that extra push to keep going because we felt [like] we were right there and we could capitalize [on that proximity],” van der Geest said. “We’ve been practicing capitalizing right after a goal happens. In practice, [head coach Jennifer Stone ‘04] would give us double points if we scored directly after a goal, so it’s something we’ve been focusing on, and it’s really awesome to see that it worked in a game.”

The two goals were on just four shots on the day for the Leopards, all of which were on goal.

“I don’t think there was a sole defensive play that sparked the defense, but the continuous interception and pressure that was given from the midfield and the defense definitely was the spark in my eyes,” Park wrote. “If there were a turnover on our end, we would immediately respond by having a strong counterdefense and capitalizing on their errors. We were relentless.”

The Leopards weren’t out of the woods yet, as there were still over 20 minutes to go in the game against the Penn attackers. There were a lot of close calls as the time winded down, van der Geest said.

“[Penn] had one goal called back on an attack penalty corner because it was too high coming in,” van der Geest said. “We also had at least two defensive saves from defenders, specifically Rachel Bird, who has been doing an incredible job of helping out Sarah [Park] when a ball somehow slipped by her towards the goal. On our defensive penalty corner unit, Rachel [Bird] is like a second goalie. She’s been like a rock out there.”

The Leopards held stingy on defense to seal the upset win over the 20th-ranked team in the NCAA RPI rankings.

“It was very much a feeling of relief after the last five minutes of the game because [Penn] had been putting so much pressure on and all we wanted was for the clock to keep ticking,” van der Geest said. “The feeling and realization of beating a top-20 team and knowing with that that we played the game we wanted and that’s how we got the win was an incredible feeling.”

“We knew going into the Penn game that a win would be a very good feeling to take with us into the Holy Cross game,” van der Geest said. “It made it even better and more important.”

The winning streak came to an end at home against Providence as the team was shutout in a 2-0 defeat. The team sits tied for second place in the Patriot League standings going into their next conference matchup, hosting American on Saturday, Oct. 20 at noon.