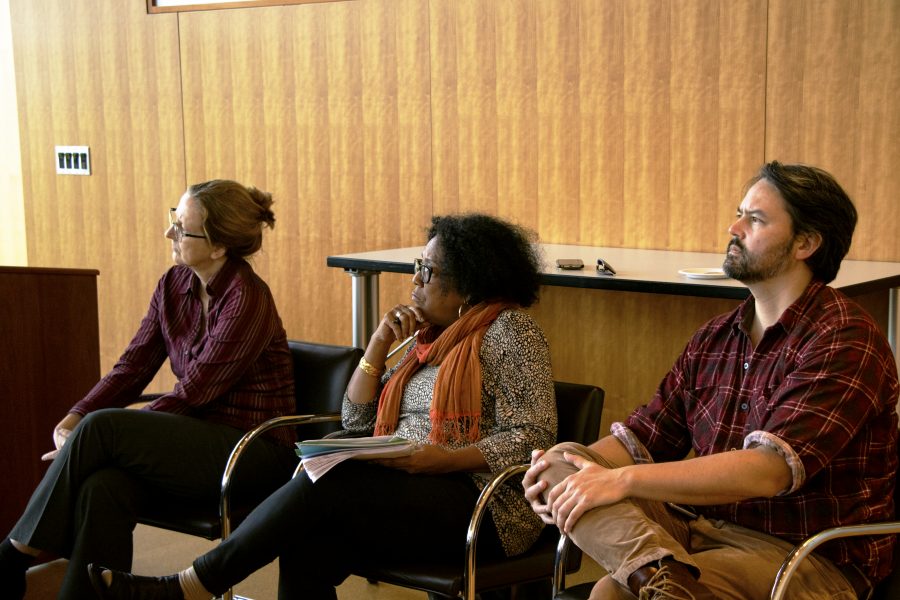 A panel of professors in international affairs, Africana studies, and history spoke to the history, policy, and status of women in Liberia. (Photo by Jess Furtado '19)

A panel of professors with experience in international affairs, Africana studies and history came together Tuesday to discuss war, history, politics and feminism in Liberia, past and present.

Wilson-Fall began the presentation, discussing some of Liberia’s history and introducing the idea of “Americo-Liberians,” whom she described as being an “elite and new ethnic group in Africa, 100 years from the time they first arrived,” descended “from liberated slaves.”

“There was segregation of Americo-Liberians from others and they formed a tight-knit community amongst themselves,” Wilson-Fall added, which created issues.

Following Wilson-Fall’s discussion of the Americo-Liberians, Lee delved into Liberia’s two civil wars, the first of which occurred in the late 80’s and early 90’s and resulted in over 250,000 deaths.

The second Liberian civil war occurred between 1999 and 2003, Lee said. The leader of the Liberian government at the time, Charles Taylor, himself the descendant of Americo-Liberians, “was known for its use of child soldiers and joint task forces.” Lee described how Taylor was eventually convicted of war crimes and arrested, garnering international attention.

Born in Monrovia in 1938, Sirleaf attended Harvard University, became Assistant Secretary General and was elected president in 2005, becoming the first elected female Head of State. Lee explained that Sirleaf received the Nobel Peace Prize along with Leymah Gbowee of Liberia and Tawakkol Karman of Yemen in 2011—four days before being elected to a second term.

“[The two Liberian civil wars] provided the context in which Sirleaf was elected into office as a person who could bring peace to the country,” Lee said.

Another notable crisis occurred during her presidency—the Ebola outbreak of 2014 to 2015.

“The virus was found in Liberia, Guinea and Sierra Leone, and had a 50% mortality rate,” Lee said. “The health system in Liberia was in disarray following the years of the civil war. There were only 50 doctors. These problems elevated her status in the world community.”

Transitioning from Lee’s discussion of Sirleaf, von Wahl addressed some questions on gender in politics.

“We know there have been relatively few female leaders,” von Wahl said. “So far there are 70 elected and appointed female heads of government or state [around the world]. Why have these few women come to power? Research shows that many come usually during times of crises and political instability.”

Von Wahl also posed the question of whether female leaders push for female interests. She explained that the “percentage of women in government is usually raised because female leaders are role models for other women and they appeal to principles of justice between sexes.”

The three professors then led a panel discussion in which audience members could ask questions. One person asked about the “efforts Sirleaf made to make the subject of violence against women in wartimes more prevalent during her presidency.” According to the panel, Sirleaf offered safe houses for women to offer protection. She also criminalized rape in Liberia.

“Female leaders will lose some legitimacy if they say ‘we’re doing something for women,’” von Wahl said. “If what they implement changes the policy for women, others will recognize it and it will help them.”