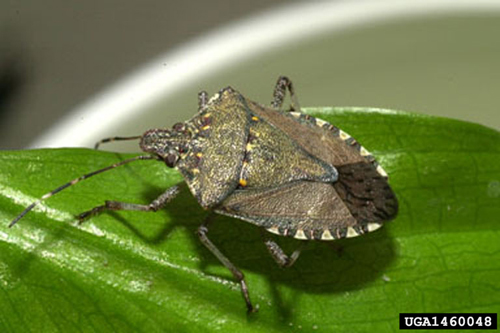 It’s that time of year again: Meeting your new roommates

Halyomorpha halys Stal. It flies faster than you can sprint, it’s a notoriously good hitchhiker, it eats through huge amounts of human food supply. It has an ominous, powerful secret weapon. It’s an invasive species first reported in the western hemisphere in Allentown, Pa., and continuously reported in Lafayette dorms every few minutes.

It’s commonly known as the stinkbug.

The species originated in northeast China and is most common throughout China, Korea, Taiwan and Japan. In the late 90s, some bugs were accidentally imported into the U.S. via a shipment of Chinese packing material. Soon after, 20 miles down the road in Allentown, Cornell researchers Rick Hoebeke and Maureen E. Carter made headlines when they published the discovery of the invasion.

With no natural predators in their new surroundings, the brown stink bug population exploded. In just over two decades, the species spread to forty states.

Stinkbugs’ favorite foods include peaches, apples, corn and soybeans, which they pierce and consume through their needle-shaped noses. This leaves brown bruises and costs millions of dollars in damage to American agriculture a year.

In early May, adult stinkbugs, or, pet name, “stinkers,” emerge from their winter hibernations. They feed for two weeks, mate, produce egg clusters, and then, three to seven days later, the next generation joins the world. All summer, they feed on millions of dollars worth of fruit and row crops. When temperatures begin to drop in September and October, they search for any entrances into buildings: through cracks around windows and doors, through damaged screens, down chimneys. Then they hunker down for winter and repeat.

This September, the Agriculture Department launched the “Great Stink Bug Count”: a citizen-powered, month-long stink bug census. More than 300 participants carried the project through bad weather, worse smells, and even the government shut down, which took the stink bug counting website down with it. Results of the surviving research will be out any day.

In agriculture, pesticide use is the go-to prevention for the stinkers. In dorms, it’s a different story. Since crushing their bodies will emit a putrid, inescapable stench, creativity is often required for stinkbug annihilation. Some of the more interesting ways include vacuuming them up, toilet-flushing them away, capturing them in empty paper coffee cups, or, for the particularly slothful, Scotch-taping the bugs in place and leaving them there until the end of the semester.