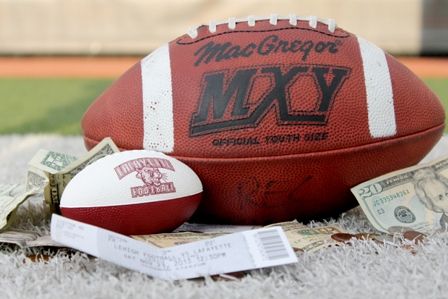 This year’s Lafayette – Lehigh football game is only weeks away, but Fisher Field’s video board is already flashing ads for next year’s landmark edition of the rivalry, to be played in Yankee Stadium.

With the flashier venue, however, comes more expensive tickets. The 2014 student prices are listed as $30-$45 more than the usual $15 to attend a rivalry game at Lafayette’s Fisher Field or Lehigh’s Goodman Stadium.

The 150th game in the most-played rivalry in college football will be played in neutral territory for the first time since 1884, in one of the most famous ballparks in the country. Although the tickets are not yet available to the general public, customers who purchase season tickets for the 2014 season can enter a promotional code that will give them access to Laf-Lehigh tickets before the general sale.

“It’s been crazy in here,” Lafayette ticket manager Jason Cichowicz said. “The phone has been buzzing all week.”

The most exclusive Lafayette seating option is in the Legends suite, which includes unlimited food and non-alcoholic drinks. Those tickets are nearly sold out, and the second priciest, the Delta suits, are nearly bought up as well. The student section option goes on sale in April.

The locale’s effects can be seen as far back as last year’s football recruiting season.

“It impacted recruiting in a positive way,” Head Football Coach Frank Tavani said. He noted the then-recruits’ “great excitement” at the notion that their sophomore year rivalry game would be played in Yankee Stadium.

Alumni, too, have reacted positively.

“I’m actually pretty excited for next year’s Laf-Lehigh, but it might be because I’m currently living in New York City,” Dana Trunk ‘11 said. “I’m not too sure how any tailgating will happen, which is usually a huge draw.”

“There’s such a strong contingent of Lafayette-Lehigh alums within three to four hours of New York,” Tavani said.

Some will feel the rivalry’s absence in the Valley more than others. Tavani, who has lived in the Easton area for 27 years, has heard complaints from local businesses that will miss hosting the population growth of thousands usually catalyzed by the rivalry.

“It’s rather unfortunate,” said an employee of a Lehigh Valley hotel, who asked to remain anonymous due to company policy. “When that weekend becomes available to reserve, about a year in advance, all the rooms are typically reserved within nine to 24 hours, regardless of which school the game is played at. My manager won’t be happy about the stadium change.”

Despite the hype surrounding next year’s game, Tavani is adamant that it shouldn’t take away importance from this year’s.

“Regardless of the setting, once the ball’s kicked, nothing else matters,” Tavani said.