From war to art 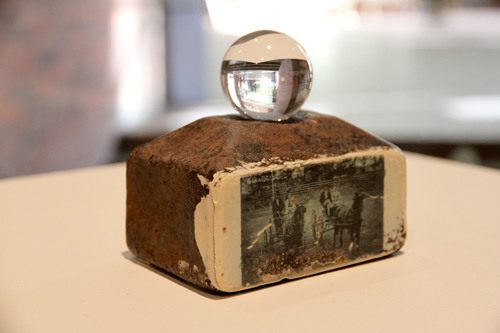 It was the heart of the Vietnam War. Robert Peterson’s mother had already paid his $275 college tuition to protect him from the draft, but Robert knew he was left with no other choice than to take the initiative and sign up.

Peterson saw the TV in his California home display a scene of several soldiers dressed in khaki uniforms, running bayonets into each other.

“I said to myself, ‘I don’t think I want to do that next week!’” Peterson said. Instead, he chose art.

Peterson outlined his journey as an artist at an informal gallery talk last Sunday. His display, entitled “Captiva Daybooks,” consisted of his first journal drawing from 1976 on Captiva Island, Florida, where he lived and worked closely with artist Robert Rauschenberg. Peterson’s Floridian surroundings served as inspiration for these journal sketches.

Peterson did not always know he had a knack for art. For one of his first “real” jobs, Peterson worked as renderer, drawing sketches for architects. Peterson could accurately draw the house and its measurements, but his real passion was in exterior decorating. Peterson was fascinated with the landscaping and aesthetics of each house. The grass he drew in the yard was not just green, but rather a deep, multi-shaded yellow, purple, green color. The mailbox at the end of the sidewalk had a red flag standing up, and there was even a red gum wrapper on the sidewalk closer to the front door.

“I’m drawing theses renderings with prism pencils and making sure every last detail was accounted for,” Peterson said. “I’m not quite sure what my boss thought when he first came in to take a look but he certainly commented on the beauty of my drawing.”

Peterson discussed the printmaking process that he has become well known in. A drawing or clipping is enlarged and copied onto a broader scale piece of canvas or muslim. Peterson keeps accurate proportions by placing a red dot in the upper left corner of the slide.

Peterson was asked to showcase his art and speak with the community after Bob Madison, a member of Lafayette’s faculty, met him during a project.