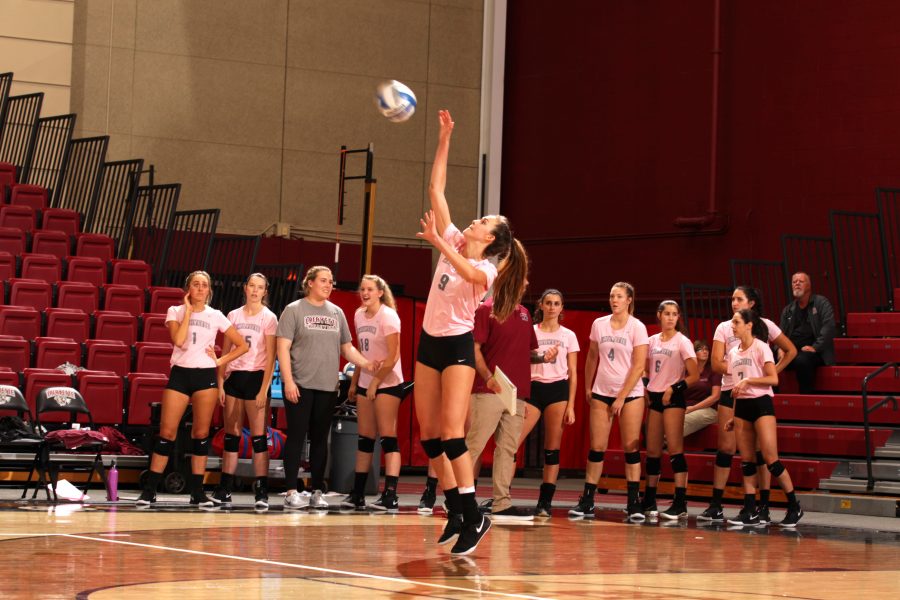 Freshman outside hitter Grace Tulevech led the volleyball team in kills and points in her rookie season. (Photo courtesy of Athletic Communications)

This week The Lafayette sits down with freshman outside hitter Grace Tulevech, who led the team in points and kills. The volleyball team is 5-19 this season.

Natalie Mogul: What do you think has been the major downfall for the team this year?

Grace Tulevech: I want to say it’s because we are all so young. We do not have any seniors. There’s four juniors, four sophomores, and eight freshman. We’re kind of now just figuring out how to play aggressively, which it wasn’t like before. I think it’s good that we’re seeing some of the teams that we’ve played already, because it’s the second half of our season so we’re playing them at home.

NM: What do you think the team can do to rebound for your last games this season?

GT: Even though our record might not show it, I think we’re on an upward trajectory. We’ve been taking back sets which we weren’t doing before. I think if we continue riding this wave we’ll be looking at a win.

NM: Do you think that next year is looking up for a better record?

GT: Yes, definitely. Like I said, the team is so young now, and hopefully everybody will return next year. We will have seniors and I think we have a new outlook. We’re definitely starting to play differently.

NM: Every game your stats have stood out, what’s been motivating you?

GT: I’ve always been the person on the court who’s really excited. I’m always ready for the next point. I also feel like since I’m a freshman I owe it to my teammates when I get playing time. I really have been motivated for my team, and I do it for them.

NM: Has there been a favorite moment for you this season with the team?

GT: Yes, when we won the Lafayette invitational here. We won all three of our games which hasn’t been done since 2015. It was an amazing moment with the team and it felt really good to win.

NM: Has it been difficult transitioning this year with volleyball and academics?

GT: Definitely. Volleyball has forced me to manage my time though. It has definitely been a shift though and takes effort to manage getting my meals in, school, volleyball, and sleep.

NM: Do you have a hobby or talent besides volleyball?

GT: I can make a clover with my tongue.

NM: What’s a fun fact about you?

GT: I was a beekeeper for two months for a senior project.