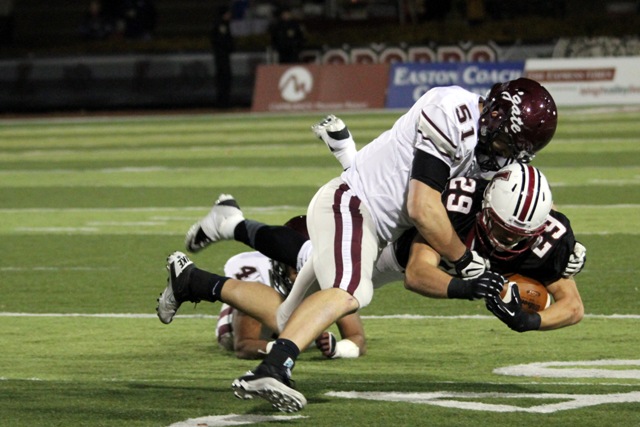 Running back Ross Scheuerman ‘15 is tackled in the second half against Colgate on Saturday.

Although meaningless in league play, the matchup against the Rams figures to be the toughest test Lafayette will face this season.

No one can blame Lafayette for experiencing lingering effects of the loss throughout the week. To perform a comeback of such dramatic proportions to fall just short on the final drive will warrant a significant level of disappointment, especially with a league championship on the line.

“We have to put last week behind us, there is not much more to say about that,” Head Coach Frank Tavani said.

While Fordham will be handful with its high-powered offensive attack that ranks fourth in the FCS (528.5 ypg), Tavani and Lafayette will have the Lehigh-Colgate game in the back of their minds as well.

If Lehigh (7-2, 2-1 PL) defeats Colgate (4-6, 3-1 PL), the 149th rendition of ‘The Rivalry’ next Saturday will have an outright Patriot League Championship and FCS playoff berth at stake.

“The way [Lehigh head coach] Andy Coen and I see it, you like it to come down to that game between the two of us every year and it has the opportunity do that,” Tavani said.

So the natural progression of analyzing these scenarios would result in Lafayette cheering for Lehigh, right?

“I don’t really care,” Tavani said. “I guess maybe I do… somewhere in my subconscious. But I really don’t consciously care what happens up in Hamilton. Our focus is on Fordham.”

To defeat Fordham, Lafayette must start the game much better than it has in its previous two matchups against Colgate and Georgetown. The Leopards allowed 28 points and 172 yards rushing in the first half against the Raiders. The week prior, Lafayette allowed the 1-8 Hoyas to hang around before blowing open the game with 21 points in the third quarter.

“I told them on Monday, rather than me screaming and yelling and getting in [their] grill at halftime, I’ll just do it ahead of time,” Tavani said. “That way, I won’t have to take three extra strength Tylenol in the middle of the third quarter.”

The loss to Colgate was especially damaging considering how well the Leopards played in the second half, allowing just 25 rushing yards, 54 passing yards and zero points.

That defense displayed throughout the second half will be necessary to slow down the Fordham offense led by junior quarterback Michael Nebrich. A University of Connecticut transfer, Nebrich has thrown for a league leading 3,181 yards and 23 touchdown passes. He has thrown 1,263 of those yards and 11 of those touchdowns to receiver Sam Ajala ‘15.

Nebrich has help in the ground game as well. Senior tailback Carltoon Koonce leads the league with 1,100 rushing yards and seven touchdowns.

Needless to say, Fordham will be a handful.

“That would be a major accomplishment for us to be the ones to upset Fordham,” tailback Greg Kessel ‘14 said.

It will be the last game at Fisher Field for the senior class.

“You don’t want to leave anything out there,” defensive lineman Jake McTighe ‘14 said. “You only get so many opportunities to play this game, you might as well make the most of them.”