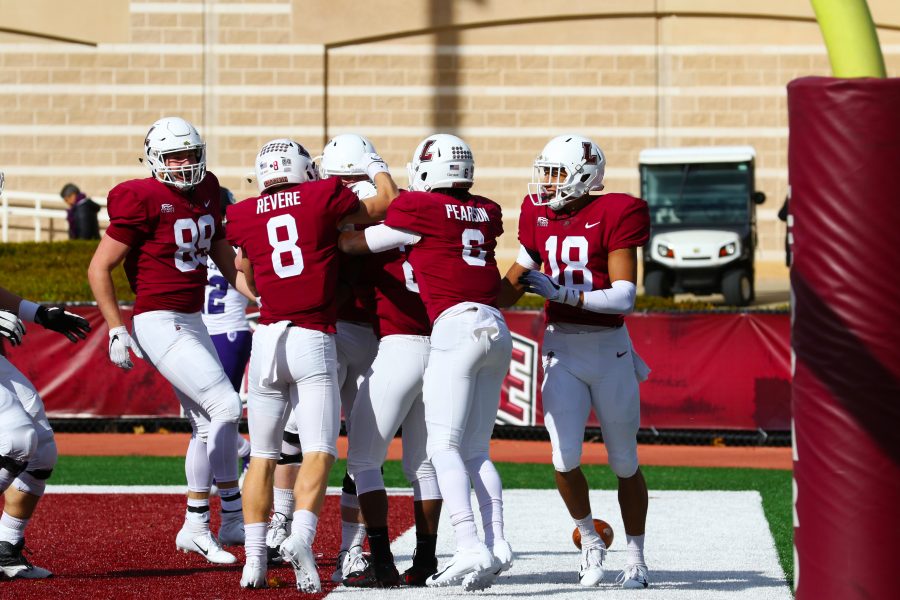 After jumping out to an early lead, the offense went quiet for the final three quarters of play while the defense allowed 40 straight. (Photo courtesy of Athletic Communications)

The Lafayette football team jumped out to an early 14-0 lead over Holy Cross this past Saturday, only to surrender 40 unanswered points, ultimately losing 40-14. Following wins over Bucknell and Fordham, the Leopards were coming into this matchup with some momentum, only to have it squandered after the first quarter of the game.

A highlight of the game for the team came on 4th-and-3 from their own 43 yard line when the Leopards ran a fake punt with a direct snap to sophomore defensive end Harrison Greenhill. Greenhill ran upfield for a gain of 26 yards and the first down, only for their drive to later stall at the end of the first half. Lafayette trailed at the half, 17-14.

Greenhill’s run was not the only big play for Lafayette. Senior running back and captain, C.J. Amill, broke off a 58-yard touchdown run late in the first quarter, which was the Leopards’ longest play from scrimmage so far this year.

Despite the big plays early on, the team was shutout for the final three quarters. Sophomore offensive lineman Gavin Barclay discussed the team’s lack of success running the football after the first quarter, saying the team faltered with their “execution.”

“Those first couple drives we were tuned in…The message of the week was ‘pounce on them early,’ get going and keep going once you start,” Barclay said. “We were stopping the run really well in the beginning of the game, and I think that led to them trying to take some shots. It’s our job to do our job and make sure that doesn’t happen.”

“We have to be all over, between the passing game and the running game,” Barclay added.

The lack of offensive success early in the game for Holy Cross could have been a result of the team’s offense attempting to score against the wind. Neither team managed to score a single point when going against the wind on their drive. Despite the challenging conditions, Garrett cautioned against blaming the weather for the team’s struggles.

“We made it easy for them to get back in the game, combined with their good execution. They created explosive plays,” he said. “We didn’t prevent their explosive plays, which we have done a good job of, and then, offensively, we got bogged down with penalties.”

Looking forward, the Leopards will travel to Army tomorrow to take on the 7-2 FBS squad in a game in which Lafayette is the heavy underdog. In an effort to pay tribute to military personnel on Veterans Day, the ‘L’ on each Lafayette helmet will be filled with a picture of a person special to each individual player. Many of the players chose family or friends who are current or former service members.