Race to the finish 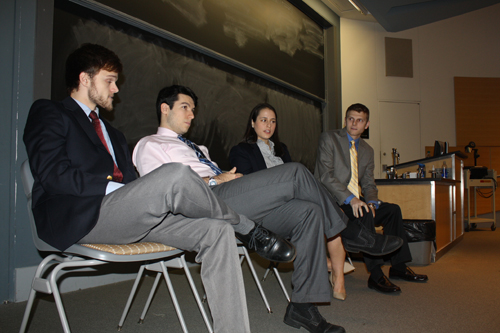 The presidential and vice presidential candidates for student government gathered for a Wednesday afternoon debate, moderated by current Student Government President Michael Prisco ‘14, to discuss issues concerning the campus and laid out the platforms they plan to follow when elected.

Connor Heinlein ‘15 (Presidential nominee) aims to increase the communication between the student body and student government, to make campus programing more efficient, and have a tighter knit community on campus. He lists his experience as the Treasurer of Student Government, the President of Residence Hall Counsel, Off-Campus Trips Director and Special Events Recreation Coordinator for the Lafayette Activities Forums, and his membership on the Student Appeals Committee as good indicators of his leadership skills.

“I try to involve myself in different groups with different focuses, so I can reach different students,” Heinlein said.

Abigail Williams ‘15 (Presidential nominee) believes her experience makes her qualified to be president. She says playing for the varsity soccer team on campus helps her understand concerns of athletes on campus. She is also the President of the Alumni Relations Council, among other extra-curriculars. Williams runs a platform that focuses specifically on the implementation and use of social media to make student government better connected with the administration and student body. Moreover, she plans to make the budget guidelines simpler, as well as making sure forums are available to be filled out at more convenient times and places.

“Lafayette students have a lot of work and extra-curriculars, so let’s put [forums] in the Marlo Room around dinner time and have an open door [policy], so you can stop by with your food [and] hear what’s going on,” she said, speaking to the crowd. “But again, if you can’t make it, check your Twitter or Facebook and you can see what’s going on.”

Ryan Monahan ‘15 (Vice Presidential nominee), the incumbent candidate, reflected on his experience working with Prisco and how they tackled drug and alcohol policies, sexual assault on campus, and other issues. He has goals to make Lafayette a more unique liberal arts experience so it does not become obsolete due to new forms of higher education, such as online universities and courses. To do this, he wants to bring back notable traditions, such as having the sword of Marquis at the convocation.

“We need to talk about how we can make Lafayette a unique liberal arts experience and how we can adapt to the 21st Century,” Monahan said.

Aaron Little ‘16 (Vice Presidential candidate) emphasized that he was the most passionate person for the job. He highlighted his commitment to diversity on campus, especially as the chair of Multi-Cultural Affairs and his relationship with the Office of Intercultural Development. He also said he promotes Greek Life and its presence in the campus community.

“I just want to make sure every student, regardless of who they are or what they do, feels at home, here at Lafayette, just like I do,” Little said.

The students who watched the debate felt also strongly about the issues on campus and the candidates’ opinions.

“There’s general feelings on inclusivity,” John Walker ‘17, a member-elect of student government, said. “They all wanted to make this campus more inclusive and accepting to everyone. That seemed like a general trend.”

“You’re getting qualified candidates that are taking the same positions and then get there a different way, in this very slight variation,” Ed O’Brien ‘16, a current member of student government who was not reelected for next year, said. Each candidate has “successfully utilized their experience in the student government this last year to put forth what they would want to work on for the next year, which is important,” he continued, “because institutional memory is so critical to something like student government.”