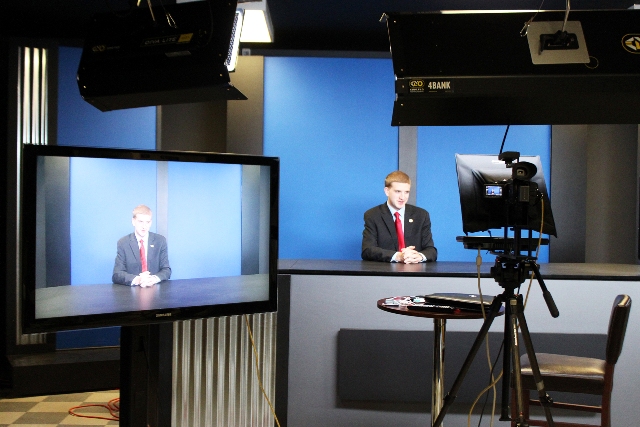 Ed O’Brien, President of Policy in Action, sits in the Conway basement studio, the headquarters of newly-founded LCTV.

“LCTV is going to provide something for the campus community that we currently don’t have,” LCTV founder Ed O’Brien ‘16 said. “It’s the 21st century, and its time to create a new media platform for campus conversations.”

Located in the basement of Conway, LCTV’s media studio is ready to be utilized. It recently acquired the necessary production equipment to produce television segments. With high quality cameras, green screens, and editing technology, students have full access to produce any type of visual media they are interested creating.

LCTV was founded by the Policy in Action club, of which O’Brien is the President, and Policy Studies program, but it is not limited to students involved in this field. LCTV will try to address important topics on campus, such as policy questions that students may have.

“LCTV is designed to get a variety of students to not only engage deeper discussions, but to practice and learn skill sets necessary for a whole variety of careers,” Policy Studies Chair Mark Crain said.

Crain is the backbone of the successful development of the studio. By remaking the space, he wants to support students’ budding focus towards the world of media.

“Communicating through visual media is the future,” Crain said. “It is the most effective way to stay informed.”

With few outlets to communicate campus conversations, the hope of LCTV is to visually expand these discussions, and get the word out on campus.

“Every current business uses visual media because that is what younger generations respond the best to,” Crain said. “Students need to develop the capacity to learn about the visual world.”

“We need a way for the campus to know what their classmates are doing and thinking,” Crain said. “Social media just doesn’t do it justice.

“Next semester we will have a much more formalized system and can start producing segments,” O’Brien said. “I am really excited to see what students come up with and what they want to capture on campus.”

LCTV is looking to eventually have segments broadcasted on the local campus television network, online, and on televisions around campus.

“LCTV is an outlet for students to project conversations on a screen, a platform that used to be unavailable,” O’Brien said. “If you want to make a real campus community that communicates efficiently, you are going to do that through media.”