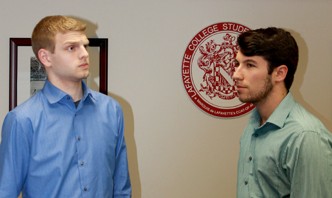 Connor Heinlein ‘15 and Ryan Monahan ‘15 were voted into President and Vice President of StuGov.

The Lafayette sat down with Student Government President-elect Connor Heinlein ‘15 and re-elected Vice President Ryan Monahan ‘15 to talk about their platforms and their plans for the next coming year.

The interview has been edited for length and for clarity.

Matt Mitterhoff: What is your platform? What do you plan on doing?

Connor Heinlein: I really want to see Student Government implement more constituent service for the students. I really think that we can do more as Student Government to really solicit feedback from the students. This actually last past year I suggested a program that we did briefly that I want to bring back more robustly—where we had a table that was just constantly running in Farinon where students could come to us, raise a concern, and then we would take that concern to the direct administrator or applicable person with whom the jurisdiction falls under.

Ryan Monahan: I worked on this last year. It was basically what we called “Office Hours Upstairs.” We could do it [this coming year], I think, if we wanted to, ambitiously, would be every week, just once a week, have a student sitting up there. We did a very good job expanding to administrators [this previous term]. I also think we need to go in the other direction this year and get more involvement from the student body.

CH: One thing I’m very passionate about is streamlining our programming process for our clubs and organizations. Currently, I believe we have a lot of overlap with our programming. We really would rather have three events held at the same time with relatively the same scope—you see this around, say, Halloween—be condensed to one Lafayette program that students can really rally behind and really further appreciate and enjoy.

MM: How would you help groups coordinate that on campus?

RM: In a lot of ways, we laid the foundation [for this coordination] in the previous year because now we are beginning to have an online calendar that says every event that’s going on and if you’re using any kind of funding from Student Government money or using LAF as a co-sponsor, you’re going to be on that calendar…that was a great way to start off, and now we can actually use that calendar to say, “Hey, why don’t we just instead of planning our event another day, hop on to this event?”

MM: Is there anything you else want to see happen in the next year?

RM: I guess another cool thing that Connor and I are working on is the revisions to the student handbook. Right now we’re on a subcommittee that is basically taking a look at our entire handbook, seeing all the [vague language] involved in it, and trying to make it very clear for students. There’s a couple good examples. I think we don’t actually have a policy for if you were to, like, punch someone in the face on the quad. We don’t have an assault policy for the handbook. We put you under what’s called the “introductory statement.” In other words, you have violated some code of ethics that Lafayette goes by.

CH: Any time a student is charged with something, they almost always are charged with the introductory statement, and those instances where that’s all they’re charged for, despite having something done having wrong like assault like Ryan’s talking about. We think we can do a better job, and we will do better job exactly articulating what it is that went wrong so we have a more substantive charge for them.