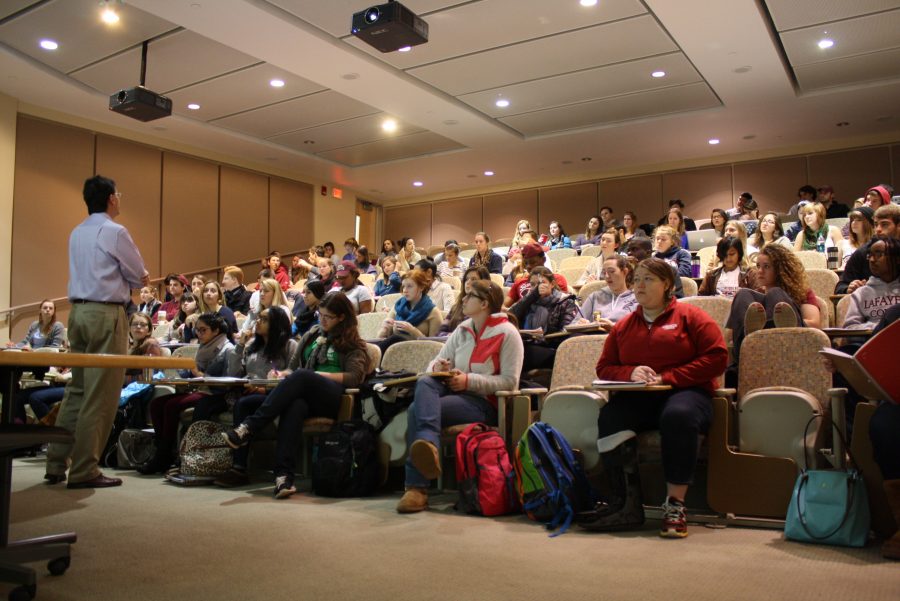 Psychology professor John Shaw lectures to his Introduction to Psychology class, one of the largest on campus.

In terms of students, Lafayette is getting bigger. It’s an undeniable fact: in the past ten years alone (2003-2013), the number of enrolled freshmen has swelled from 586 to 635.

Reactions to this growth are mixed at best among faculty. In an Oct. 12 article by The Lafayette, several key professors, including department heads Patricia Donahue, George Panichas, Arthur Kney, and Jenn Rossman, expressed concerns over the growing size of the college.

A better question may be: how are these numbers being decided? According to Provost Wendy Hill and Vice President of Finance and Administration Mitch Wein, it’s a complicated process with a lot of different factors.

Indeed, a complex tangle of committees and subcommittees dominates the procedure of determining the targeted range of students. According to Hill, there are several main committees that help suggest a number to the administration as a whole.

The committees consist of the Administrative Committee of Enrollment (ACE) Faculty Academic Policy Committee (FAPC), and the Enrollment Planning Committee (EPC). According to Hill, the FAPC has a subcommittee that is charged with budget discussions, working closely with Wein.

“What happens is that the FAPC will provide significant advice to the administration about the target for the first year class,” Hill said. “The administration takes that into consideration and brings forward a budget to the Board of Trustees.”

When the committees determine the targeted numbers, Wein said they take into consideration a number of factors. Among those factors are the number of academic programs, the number of facilities, size of classrooms, and cost. Wein also said that growth may be a way of tempering tuition increases.

“Lots of schools similar to Lafayette have grown,” he said. “They’ve grown to manage the cost so that if there are revenues that are generated from students, you want to have students to pay for that rather than have tuition go up. Some schools have specifically increased enrollment. You try and think about ways to hold cost down, and think about the academic program first and foremost.”

Chair of the Faculty Committee on Economic Planning, Professor Angelika von Wahl, described her committee’s role in the planning process:

“Our committee is big and includes students, administrators from admissions and financial aid, faculty, and the Vice President for Campus Life [Annette Diorio],” she said. “In addition, we sometimes request other experts to attend the meeting. All of these groups chime in and together we try to develop a perspective on priorities and needs.”

She continued, “As the chair of the committee, my job is not to provide a specific number but to be a facilitator of our discussion. Otherwise it would be a very narrow perspective on the manifold enrollment issues. I am interested to hear everyone’s opinion and we arrive at proposals with each other.”

When asked about the differing opinions from other faculty, von Wahl admitted that “it’s very difficult to assess the level of satisfaction among the faculty relative to the size of the college. It would be presumptuous for me to speak for my 200 plus colleagues.”

“It’s important to understand that the college has so many moving parts,” she said.

Hill mentioned that all faculty have a chance to voice their opinions on enrollment size in an annual budget meeting.

“There’s a meeting in the fall as a way of getting the faculty’s input,” she said. “All faculty are invited to that meeting.”

Wein said that the process is a long, well-thought out series of steps that try and take into account factors such as the student-faculty ratio, student-per-square-footage ratio for facilities, and the quality of the applicant pool.