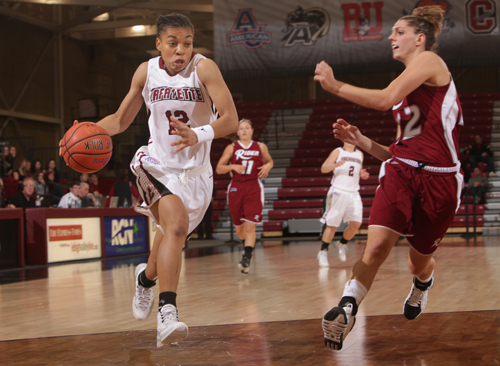 Linnel Macklin ‘15 scored five points in the final minute against Loyola to secure the victory.

Facing adversity for the first time this season the Lafayette women’s basketball team bounced back from a heartbreaking loss against Northwestern to beat Loyola 66-55 last Friday. The team improved its record to (5-2) on the season, putting them right where they want to be.

Despite the second loss, Coach Nolan and the team left with the mentality that they can still perform at the same level as anyone in the league.

“We battled them,” Nolan said. “We were down and then able to come back. We can play with anybody.”

Fighting from down 16 points in the first half, Lafayette rallied to tie the game late before losing on last second free throw. In what was an extremely controversial foul call in the final seconds, the challenge arose. Would the team be able to bounce back?

Just two days later, it rebounded in a big way closing the door with a late game rally against Loyola. Junior guard Linnel Macklin ‘15 scored five points in the final minute to seal the victory.

“This team is very able to focus on the job at hand,” Nolan said. “And that job on Friday was to beat Loyola. They didn’t let that loss distract them.”

Nolan cited the team’s difficult travel schedule on the Tuesday before the Northwestern game as an example of their focusing skills. The team left for the airport at 5:30 a.m., flew to Evanston and then practiced immediately after landing. It was there that they turned in one of their best practices of the year.

Embodying that form of mental toughness is the aforementioned Macklin. Constantly drawing the opposing team’s toughest match-up, what the shutdown defender does isn’t always reflected in the stat sheet.

“Linnel is very business as usual,” Nolan said “She is an all-out competitor who is all about the team winning.”

Alongside Macklin has been senior captain Danielle Fiacco. Fiacco contributed another solid performance in the win over Loyola. The center came up a rebound shy of a double-double, with 11 points and nine rebounds.

Fiacco credited the team’s mental toughness when they faced yet another deficit late in the second half.

“When we lost the lead at the four minute mark we didn’t lose our heads,” Fiacco said. “Instead we came together and played smart.”