After 50 consecutive Laf-Lehigh football rivalry matchups, professor Peter Newman ’73 reflects on how the game has changed 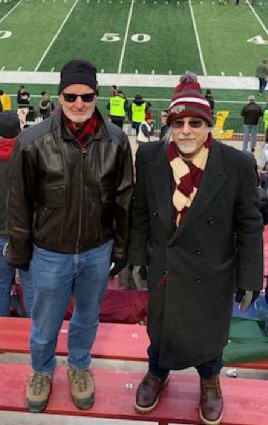 Peter Newman ‘73 was not driven to enroll as a student at Lafayette College for the thrilling rivalry between the Leopards and Lehigh University. Now as a part-time American Studies and first-year seminar (FYS) professor, he just attended his 50th consecutive Laf-Lehigh game.

Newman, who went to the game with his former Lafayette roommate, has seen The Rivalry become more one-sided in the past half-century. Since he enrolled, 10 classes of Lafayette students have not seen a Lafayette win as students. With Lehigh’s 34-3 victory at Fisher Stadium, where the Mountain Hawks capitalized on several Lafayette turnovers, yet another four years passed, and another Lafayette class will graduate with no victory.

“It’s an incredibly emotional game,” Newman said. “Players and athletes respond to ups and downs. There was so much going on, it was hard to get into a rhythm. It was bizarre that so many things were going crazy wrong.”

When he started college, Lafayette led the overall Rivalry record by 23 games. This has since whittled down to seven games with the recent loss, Lafayette’s fourth in a row.

“During the course of my 50 years, we’ve lost a lot more than we won,” Newman said. “I feel badly for the seniors, never having a victory.”

Newman echoed the sentiment of many members of the Lafayette fanbase as the Mountain Hawks celebrated their win: the Leopards still have the 150th game win, when Yankee Stadium hosted college football’s longest-standing annual rivalry.

“The Yankee Stadium game was the biggest,” he said. “It was very cool to walk into Yankee Stadium, it was really amazing. No one knew what would be the result of it when someone floated the idea. It got national attention so you really wanted to win. New York was into it, and they lit the Empire State Building with Lafayette-Lehigh colors.”

In his four years as a student, Newman saw one Lafayette win in his sophomore year. He said he experienced a more intense lead-up to the game.

“I think it’s still a really big rivalry, but there was a lot of hoopla about it 50 years ago,” Newman said. “It was really a whole week of preparation for this game. It was a big deal. Lehigh students would come in and light bonfires and paint the field.”

Lafayette and Lehigh transitioned to co-ed during the time Newman was earning his undergraduate degree. He said Lafayette was 80 percent fraternities at the time.

“There were parties at every fraternity, with live bands. They were all open parties so you went around from house to house. By Monday it was over.”

While there were some empty seats at the 2018 game, Newman said students would often have trouble even getting their tickets when he was a student. He mentioned that Lafayette had measures to keep Lehigh students from invading campus before the game.

“They would block off streets, and we would have to be at each corner so cars couldn’t go on campus,” Newman said.

“The college put the statues in boxes so no one could spray paint them or steal the sword,” he added.

While Newman said the 150th meeting of The Rivalry was the biggest, he has memories of other games that stood out to him, including the win his sophomore year. The 1987 game, a 17-10 win for Lehigh, is another that stands out to him due to the conditions.

“I remember going to the last game at Taylor Stadium, and it was one of the coldest, windiest experiences, but I made everyone stay for the whole game,” he said. “I think we were among 200 people who made it to the end.”

Newman recalls Lafayette’s 2004 victory over Lehigh, as it got the team into the playoffs with a 24-10 win. He said the team’s playoff loss to Delaware was closer than the 28-14 score indicates.

“It was a very good game,” he said. “My son was going to Delaware, so it was cool. I went down there to watch.”

Despite the less intense lead-up to the game and the recent swing in Lehigh’s favor, Newman became more determined to reach 50 games in a row the closer he came.

One thing that has stayed the same was that The Rivalry for the fans is more important to win than the other games combined.

“With the Lafayette-Lehigh game nothing else mattered,” Newman said. “Something that makes it a bigger deal, no matter what your season is, if you win the Lehigh game it’s all okay.”