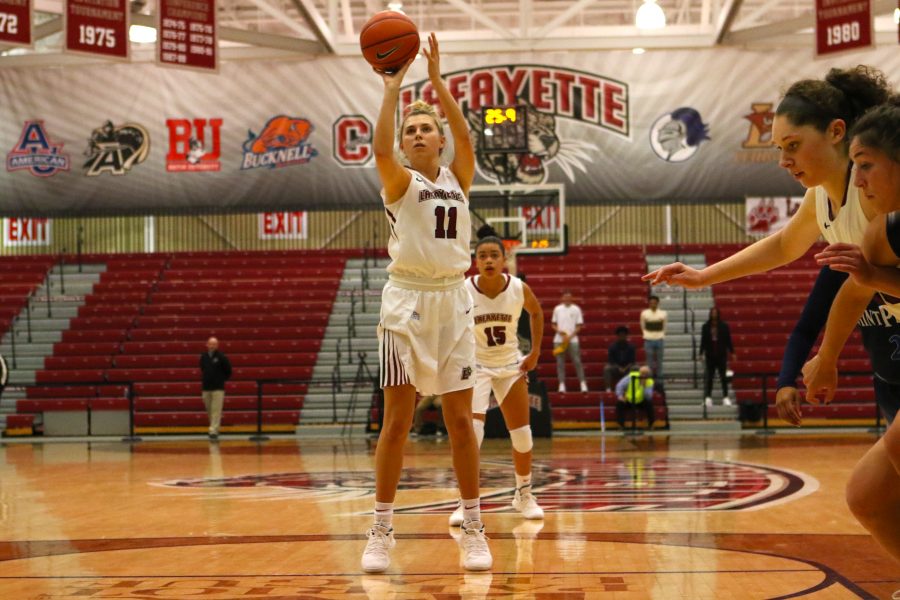 After losing twice in a Thanksgiving tournament at Florida Atlantic University, the team's record stands at 3-3 overall. (Photo courtesy of Athletic Communications)

Lafayette came out strong offensively in the opening game of the tournament against FAU, scoring 18 points in the first quarter while holding the Owls to 10 points with eight turnovers. In the second period, FAU’s offense heated up and began to narrow the score, ending the first half with the Leopards leading 27-23.

In the third quarter, FAU capitalized on a cold shooting stretch for Lafayette. The Owls scored 22 points in the third quarter alone, and ended the frame on a 22-4 run. The Leopards were able to speed things up in the fourth, regaining the lead with just over four minutes left on the clock. After several minutes with no scoring from either team, FAU responded with a basket and four free throws to regain the lead for good with less than a minute to play.

Against FAU, sophomore forwards Olivia Martino and Natalie Kucowski led the Leopards with 10 points and nine rebounds each.

On Saturday, the Leopards started off slow against Delaware and never recovered. In the first quarter, the team scored just six points compared to Delaware’s 14. The Leopards earned 29 free throws in the game. They made 22, accounting for nearly half their points on the day.

The Leopards were able to out-rebound the Blue Hens, 46-39, but did not take the lead at any point of the game. The Leopards shot a season-low 19 percent from the field, while the Blue Hens shot 45 percent.

Kucowski again led the team in points and rebounds, with 16 points and 10 rebounds.

The Leopards are now 3-3 overall, after opening the season with a 3-0 record. The team returns to the court on Dec. 1, when they will host Albany for the annual Recycle-Mania game.