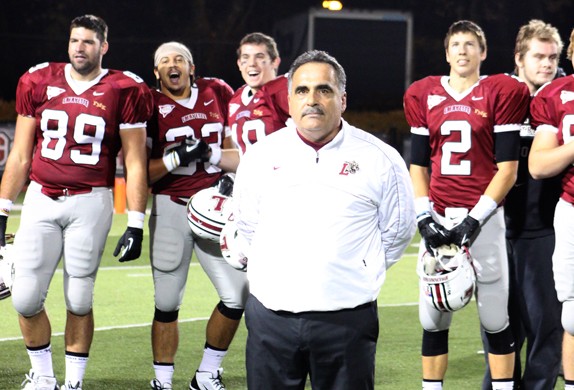 Extension: Lafayette football head coach Frank Tavani has received a one year extension and will remain in his position at least until the end of the 2016 season, it was announced by the athletic department.

Tavani, now entering his 15th season as head coach at Lafayette, recently guided the Leopards to their first outright league title since 1994. Many Leopard fans will remember for years to come the 50-28 victory over then No. 15 ranked Lehigh that secured the championship.

Talks regarding an extension began just before the holidays and were finalized after the New Year.

“There is a number tagged on me by my birthday, but I’m 60 going on 20,” Tavani said on Wednesday. “I have no thoughts on retiring anytime soon. My goal when I started here on December 11 of 1999 was to run a really strong program and graduate young men and win championships and retire here.”

Tavani has been with Lafayette for now 27 seasons and has contributed to seven league title victories.

“My thoughts are we want to win some more championships,” Tavani said. “I have three spots left on my fingers to hold up both hands.”

The offseason is seemingly always quicker than originally thought out to be, and the 2014-2015 season is right around the corner with National Signing Day this Wednesday.

“I’ll know someday when I don’t have that energy and when it becomes not fun,” Tavani said. “But I’m really energized with our new leadership under [President] Alison Byerly and the support she has given to the program.”

Note: Signing Day is next Wednesday. The Lafayette will be providing coverage of the new recruiting class throughout the day. Tavani said Wednesday the class size is at 25 recruits.