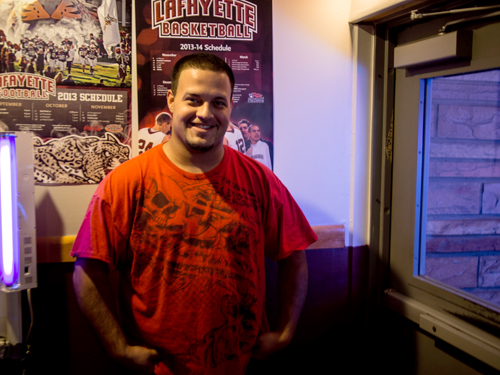 Orlando Ortiz, the bouncer at Milo’s Place, is a familiar face for Lafayette students.

If you’ve been to Milo’s Place on Cattell Street, you’ve met the friendly face at the door waiting to check your I.D.

Orlando Luis Ortiz, Jr. may be a familiar sight, but there’s a nuance and poetry to his story that many of Milo’s patrons are probably not aware of.

For instance, the construction company he owns. Dubbed Wolf Construction and Design, his day job is named after his nickname, King Wolf. The moniker was in turn earned during his time in the Marine Corps.

Despite the fact that his Military Operation Specialty was a mechanic, he spent eight years in the Marine Corps utilizing Native American “tricks” that “no one else knows.” He is credited with 137 confirmed captures—all of which are classified, according to the King Wolf. But that’s not actually too big of a number, he’ll say modestly if asked.

Despite holding a relatively modest occupation currently, Ortiz once attended the prestigious University of Pennsylvania. He arrived armed with big plans to study bio-molecular engineering and to ultimately design an improved artificial heart valve. Heart issues run in his family, but his dreams to solve his family’s problems were dashed when he was diagnosed with nerve damage upon returning from his military service.

“My hopes and dreams of doing surgery or anything of that nature—gone,” he said.

He’s the oldest of 16 children, and also the loving father of three children. You can tell how much he loves them by the way he talks about them, even in just a few words.

Orlando’s most endearing quality is by far his personal philosophy

His title at Milo’s is not actually “bouncer.” He’s the doorman, more of an amicable greeter than surly enforcer. If you’re acting up, he’ll try to refrain from physically throw you out—he’ll lure you halfway out the door with the offer of a cigarette, and the rest of the way with the offer of a light.

But if a situation calls for it, he will hold his own. One of the worst incidents in his recent memory at Milo’s was when two football players, bulky linemen, picked a fight with him. Little did they know he weighs 300 pounds, comprised of mostly muscle.

He had the dispute settled “very quickly,” he recalled.

He is the self-described “big brother” of Lafayette students. He knows their names and listens to countless life stories and personal problems. He looks out for them, against situations ranging from protecting students from themselves to situations that look like potentially dangerous situations. He doesn’t shy away from stepping in.

The students that pass by him night after night appreciate the benefits of his presence.

Said senior Bianca Agcaoili, “Orlando is the nicest guy and literally knows everyone that walks through Milo’s door.”

Not a bad description for a King Wolf.

Michael A. Kowaleski ‘14 contributed reporting to this article.