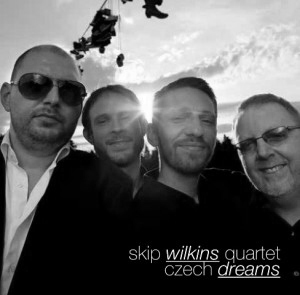 Last October professor of music Skip Wilkins released his eleventh album entitled “Czech Dreams.” The album was recorded by the Skip Wilkins Quartet, featuring Wilkins on piano and his co-musicians on Tomáš Hobzek drums, Libor Šmoldas on guitar and Tomáš Baroš on acoustic bass. Select tracks also include additional saxophonist Rostislav Fraš and vocalist Marie Puttnerová. The album features eleven tracks with both English and Czech titles. Wilkins received positive reviews on this album from publications such as All About Jazz.

No stranger to travel, Wilkins has routinely spent summer and winter breaks in the Czech Republic since 2007, performing in concerts and running musical workshops. Wilkins previously collaborated with Czech musicians on his seventh album “Frydlant Nights.” In 2012 Wilkins travelled to the Czech Republic for his year long sabbatical with the intent of composing and recording an album made exclusively with the collaboration of Czech musicians. Wilkins already had musical contacts in the Czech Republic and wanted to “mingle and mix with a variety of musicians,” Willkins said. He feels that international collaboration lies at the very heart of the jazz genre, which emerged as a “collision of many cultures.”

The album title “Czech Dreams” reflects the inspirational role of the Czech people in the creation of these songs. In his liner notes Wilkins dedicates his work to the Czech people, citing his desire to make “an affectionate portrait of the people and places around me at that time.” In turn the Czech people have showed their appreciation for this album, even pouring a beer over the album on stage at the Reduta Jazz Club as a cultural and ceremonial gesture.

During his time abroad Wilkins particularly enjoyed European appreciation of music, citing packed concert halls and frequent encore requests as proof that “art is alive in Europe.” Wilkins explains that this performing experience differs from the modern realm of American entertainment because “art is not part of the consciousness of American life.”