Role playing for a good cause: Sixteen students travel to Harvard for Model UN conference 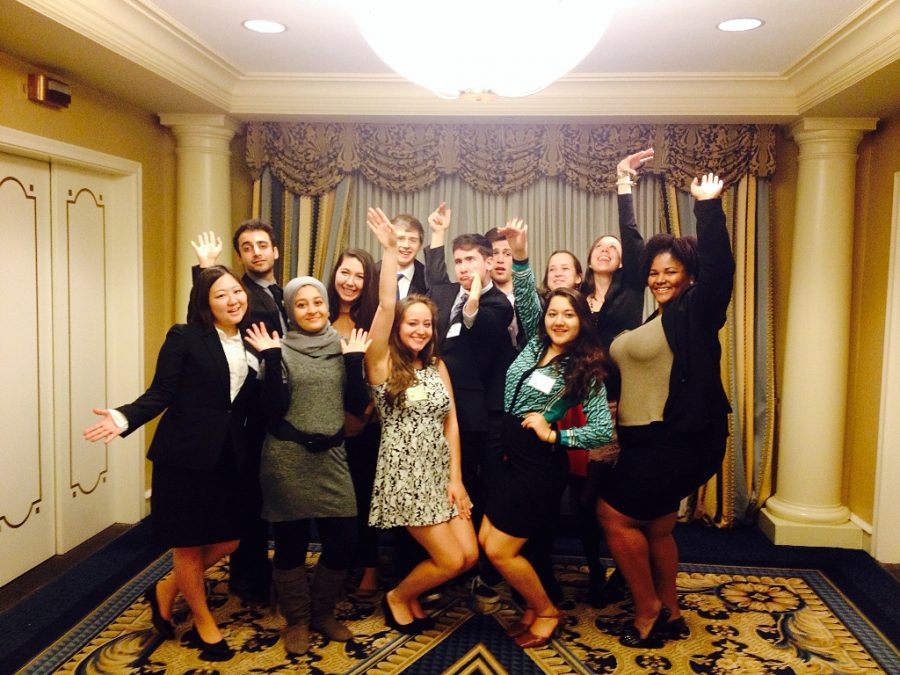 Students from Lafayette and universities located in 70 different countries, such as Syria and Palestine, traveled to Cambridge, Mass. this weekend to participate in the Harvard National Model United Nations conference, the largest MUN conference in the world.

To prepare for the conference, students wrote a position paper on an assigned topic affecting the country they were representing. They would discuss this issue in their respective committees; then during the conference, they had the chance to develop resolutions and to practice public speaking.

Students would also take part in committee hearings, which lasted three hours per day. The sessions were moderated by the directors of the conference, which were Harvard students. The conference also hosted events, such as dances, for the participants to get to know one another better and allow for a more social setting between the students.

Sixteen Lafayette students served as delegates at the Harvard conference, representing Rwanda and Belize. Jeff Wheeler ‘16, who went to the event, his first time attending a MUN conference, served on General Assembly Committee for Special Politics and Decolonization as a delegate from Belize. An International Affairs major who is thinking about the possibility of working for the United Nations after graduation, Wheeler said he “felt like [the conference] would be a great way to start heading in that direction.”

Wheeler and his partner, Basmah Raja ‘15, debated with other delegates about “the adverse effects of international narcotics trafficking,” and worked with other students “to pass a resolution that would help us deal with the producers, transporters, and consumers of illegal drugs such as heroin and cocaine.”

He also took part in meetings involving other delegates’ presentations on the issue, while trying to persuade others to “join them and draft a resolution together.”

The goal of the MUN club on Lafayette’s campus is to “make friends from different states and different parts of the world, learn about how the United Nations works…and to develop the skills of working with others and speaking in front of crowds,” president of the organization at Lafayette Camila Moscoso ‘16 said. As a biology major, Moscoso joined MUN in order to “learn more about issues in health in the global community.”

She also said she “was proud to see how into [the conference] people got after the first day.”

Wheeler said he “was surprised by how quickly I got wrapped up in the role-playing scenario.” He believes, through this experience, that he “gained a lot of self-confidence in my knowledge, flexibility, and presentation skills, and it confirmed to me that international policy is something that really excites and motivates me.”

In the upcoming years, Moscoso hopes to “have a big enough budget to take 30 students to the conference” and to have Lafayette win a prize at the conference such as “Best Delegate” for their committee.

Wheeler said that he will continue working with MUN at Lafayette and recommends it to “anyone with an interest in international diplomacy.”

Students stayed at the Boston Park Plaza, where other students from the conference stayed, which allowed them to interact with other college students from around the world.

Moscoso said she and other Lafayette students “became really good friends” with their neighbors in the hotel, who were from Mexico.