Track and field impresses in final meet before league championships 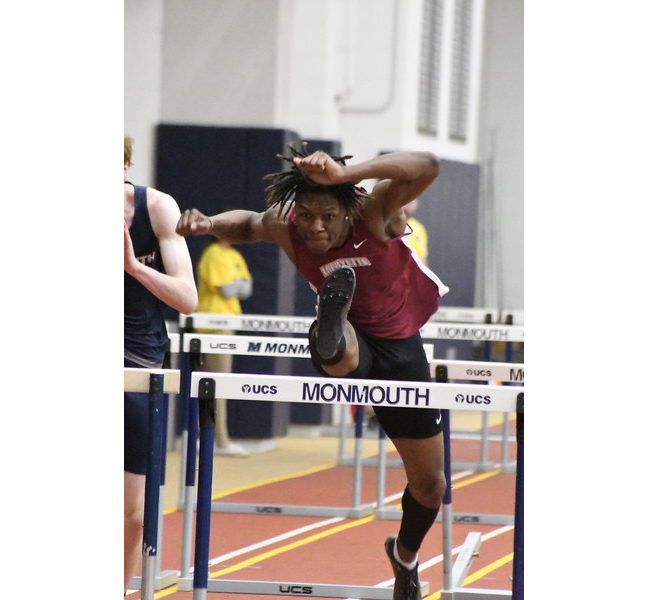 Freshman Tim Payne finished third in the 60 meter hurdles, only .01 seconds out of first. (Photo courtesy of Mike Mozzochi)

This past weekend, the Lafayette track and field team had a solid outing at the Monmouth Invitational in Monmouth, N.J., in their final tune-up before the Patriot League Championship meet on Feb. 16-17. Nine Leopards set personal bests during the competition, as the team has continued to steadily improve over the course of the winter season.

“The team has been emphasizing patience and speed during our practices to prepare for the Patriot League Championships,” said freshman Autumn Sands. “A lot of our workouts have been focusing on either many evenly paced intervals or a few very fast intervals so we can outkick other teams in the last lap of the race.”

For the men, freshman Jesse Schmeizer led the way with a win in the 800-meter run in 1:59.90, an indoor personal best. Fellow freshman Ryan Murphy followed closely behind with a time of 2:02.73 on his way to a third-place finish. Junior Calvin Schneck recorded a personal best with a time of 2:30.42 in the 1000-meter run, good for first place in the event, while sophomore Sam Fishbein had an impressive win in the weight throw with a personal best toss of 17.65 meters.

“To win any race, it takes a certain amount of strategy and discipline,” said Schmeizer. “[Winning] lets you recognize the work that you’ve put in, and allows you to be happy with that success for a few fleeting moments as you cross the finish line first.”

Freshman Ross Kennedy placed second in the 400-meter dash with a time of 50.80 seconds, earning a Patriot League championship berth. Sophomore Jermaine Rhoden won the high jump and set a personal best with a top jump of 1.99 meters, tied for the seventh best in Lafayette school history.

In the 60-meter hurdles, freshman Timothy Payne secured a third place finish for the Leopards with a time of 8.53 seconds. Payne’s time is the sixth fastest time in school history for the event. Sophomore Harrison Greenhill also performed well, finishing third in the shot put with a top throw of 16.24 meters. Payne and Greenhill both also compete on the Lafayette football team, as a wide receiver and defensive end respectively, and both joined the team at the end of winter break in January.

“It’s been huge having guys like Harrison [Greenhill] and Tim [Payne] join. They’ve added so much to the team,” said Kennedy. “Harrison has some of the highest shot put distances of all time, and Tim has times [in hurdles] that could have won last year at Patriot Leagues. They’re both incredibly committed to the team. When someone comes in throwing like Harrison or running like Tim, we welcome them with open arms.”

On the women’s side, senior Caroline Harmon excelled in the 1000-meter run, winning the event and setting a personal best of 2:59.27. Sophomore and senior teammates Emily Becker and Samira Sujak placed third and fourth in the event with times of 3:09.24 and 3:09.30, respectively. Freshman Cassandra Wilk had another big week as she won the mile run while also setting a personal best with a time of 5:15.21. Freshman Arielle Sclar won the pole vault with a top mark of 3.05 meters.

“When everyone is doing well, the energy on the team is really high. It’s a kind of happy that looks towards the future,” said Schmeizer. “It’s a feeling that all the work we’ve put in as a team, every talk we’ve had about improving, putting forth effort into every single rep of a workout, has paid off.”

“And that as we approach the Patriot League Championships, we have the potential to move up as a team,” he added.

With the championship meet fast approaching, every athlete is pushing themselves to improve in order to drop time for the end of the indoor season.

“Calvin Schneck had an amazing 1000[-meter run]. Coming into the last lap, he really surprised everyone by literally moving into first place in the last steps of the race,” said Schmeizer. “It’s because of the sense of community that comes from being teammates, that we push each to do better and better.”

As the indoor season comes to a close, the team has turned its focus to the Patriot League indoor championships before the outdoor portion of their schedule begins in early March.

“Everyone’s super excited to see all of the competition, especially from teams like Army, Bucknell, and Navy,” said Kennedy. “They’re going to be putting up really competitive numbers. As the week progresses, I’m sure that everything will ramp up.”

This weekend the Leopards travel to Annapolis, Md., for the Patriot League indoor track and field championships.