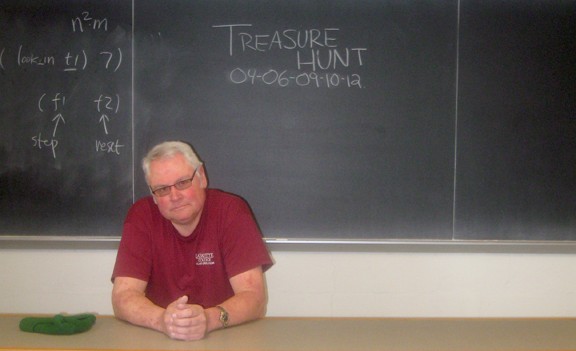 Joe Reed, a custodian at Lafayette, won the lottery in Decemeber, collecting $80,000.

Meet Joe Reed: a custodian at Lafayette for the past decade, a life-long resident of the Lehigh Valley, and a strong believer in karma.

Over Thanksgiving break, Reed was at the bank and noticed the masses of Wells-Fargo brand toy ponies sitting uselessly around on the counters.

“Hey John, do you have an extra pony?” he asked over the counter. The banker handed him a pony. Joe packed the toy in a box and mailed it to St. Jude’s Children’s Hospital in Philadelphia. He attached a note: “It’s named Shamrock. Please give this to a kid on Christmas morning.”

Reed has been a regular lottery ticket buyer for almost as long as he can remember. On this particular day, December 2, he bought five tickets and got two extra for free.

“Can you print out the winning numbers?” he jokingly asked the cashier at Weis Market. As he was walking out to his car, he scratched off the first ticket, the second ticket, the third ticket, and then the fourth ticket, the one for the Pennsylvania Treasure Hunt. Jackpot.

“I did it!” Reed yelled. He recalled going back into the store “with [his] hands in the air,” people congratulating him from every direction.

“It was a wonderful feeling,” he said.

When asked his secret to picking the winning numbers, he said, “They’re all birthdays,” but that’s as far as he’ll let on.

“I think [the Lord] had a lot to do with it,” Reed reflected. He views the winning as “a blessing.”

The $80,000 is not enough to retire early on. You can still find him whistling merrily, pushing his cart down the halls of Acopian. But it’s enough to live more comfortably and do a few nice things.

The check was mailed last Monday. “I’m just gonna look at it for a while before I get it cashed,” Reed said. After that, his plans are to take a few of his co-workers out to dinner, and to send some of the winning cash to different humanitarian organizations.

Reed said he will make donations to the Humane Society, an animal protective organization, and the Red Cross. Being unmarried and without children, and after eventually leaving some of his estate to friends, he plans to leave the majority to charitable foundations.

“I feel that you should give to charities,” Reed said. Someday you’ll get that back, he said, but it’s also just the right thing to do. He also believes that people with a lot of money should do more to help out those with fewer resources.

At the College, Reed only told a few close friends, because, in his own words, “money and bad news get around.” But the news hasn’t changed anything too much, he said.

Reed received a thank-you note from St. Jude’s, but he realizes he probably won’t ever get to meet the child who received the stuffed animal on Christmas morning. But that’s okay, he said; he can imagine the smiles and the joy it caused.

Maybe with his next lottery ticket, he’ll donate a real pony to children who will truly appreciate it.