In 1983, Lafayette opened Williams Center as first central home for the arts 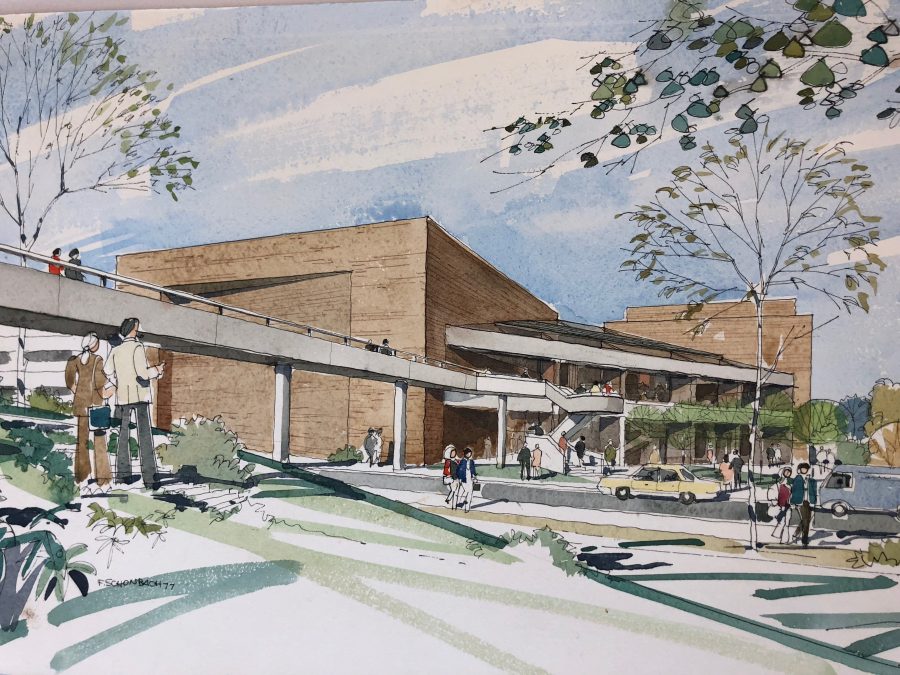 The proposed exterior of the Williams Center for the Arts in 1977. (Photo courtesy of F. Schonbach)

Before the college’s downtown campus dedicated multiple buildings to provide a central hub for the arts, there was Williams Center for the Arts. It was the first primary location for the campus’ art endeavors and continues to serve as the home of the arts up the hill.

The need for students to have a central space for the arts, and the originally anonymous generosity of Morris R. Williams ’22, eventually culminated in the construction of the Williams Center for the Arts, which began in 1981.

At the building’s dedication on Sept. 30, 1983, Morris Williams called the building “an everlasting force in the future development of the College,” according to the college’s archives. The building, which cost $8.7 million to build, was designed by the architecture firm Perkins and Will of Washington, D.C.

Prior to the existence of the Williams Center, arts on campus were spread out in inconvenient places. Before the Williams Center was created, theater productions were on the second floor of Hogg Hall in a converted chapel for more than 50 years.

Colton Chapel was one of the main venues for the arts before the Williams Center was constructed.

“Colton Chapel, used for most traveling productions, has only overhead lighting, no wings, and no dressing facilities, [whereas Williams Center now] provides a spacious stage, a 400-seat theater, and professional quality lighting system,” said Patricia Facciponti, the News Director for the college at the time, said shortly after the Williams Center’s construction, according to an archived document.

She also stated that, “There was no scene shop or storage” and “the design of sets was invariably complicated by the inability to change backdrops [in Colton Chapel].”

This proved to be an inconvenience to student actors at the college, as well as traveling production companies. One of the draws of the Williams Center today, for both students at the college and the public, is the number of high-profile individuals and groups that perform there, as well as the accommodations the building provides.

Musicians, too, felt the harsh lack of a creative hub, often having to travel between as many as four different buildings to find rehearsal space. If they wanted to practice, “students had to chance upon vacant classrooms where pianos could be used.” Many ensembles, including marching band, jazz band and orchestra had to practice in the alumni gym (now Oechsle Hall) where, “the sound echoed off the polished floor and hard-surfaced walls,” according to the archives.

Although the college was aware of the need for a space dedicated to the performing arts, planning for the building took longer than expected. Williams, “had been in the planning stage for 11 years before its realization,” said Don Noblett, Vice President of Physical Planning in 1989, according to the archives. Construction for the building began the summer of 1981.

“It started with a potential gift to establish a new stage…unfortunately, the pledge was never received and plans for the new theater were abandoned. Now, however, the administration and trustees were forced to look at the issue on a broader level,” according to the archives.

At this point, enough interest had been sparked for the project for it to begin to gain momentum. However, two challenges were still being faced: funding and location. The problem of a location for the building was addressed by demolishing a portion of student housing located in the area at the time, and funding was solved by an anonymous donation in 1980, later revealed to be Morris Williams.

A soccer player, Williams majored in mechanical engineering and was a member of Delta Kappa Epsilon. After graduating, Williams took a position at his family company, C.K. Williams & Co., a firm which produced pigments and fillers. He eventually became chairman of the board and treasurer, although he and his wife Josephine continued to live locally until the early 1980s, where they were active supporters of local institutions such as the YMCA, the Children’s Home of Easton and Easton Hospital

According to Facciponti, the firm of Perkins & Will followed three primary criteria when designing the Williams Center: first, it was “largely based on a complex analysis which considered above all the special mechanical, and acoustical requirements for art, music, and theater.” This was likely in direct response from students and faculty on the inadequacy of the performance spaces available prior to the Williams Center’s existence.

Second, “it was important that the exterior development of the building use material and a scale which would allow it to be seen as a natural outgrowth, yet a contemporary expression of the existing campus architecture,” according to the archives.