Introducing Gavin: A Q&A with an openly gay Lafayette athlete 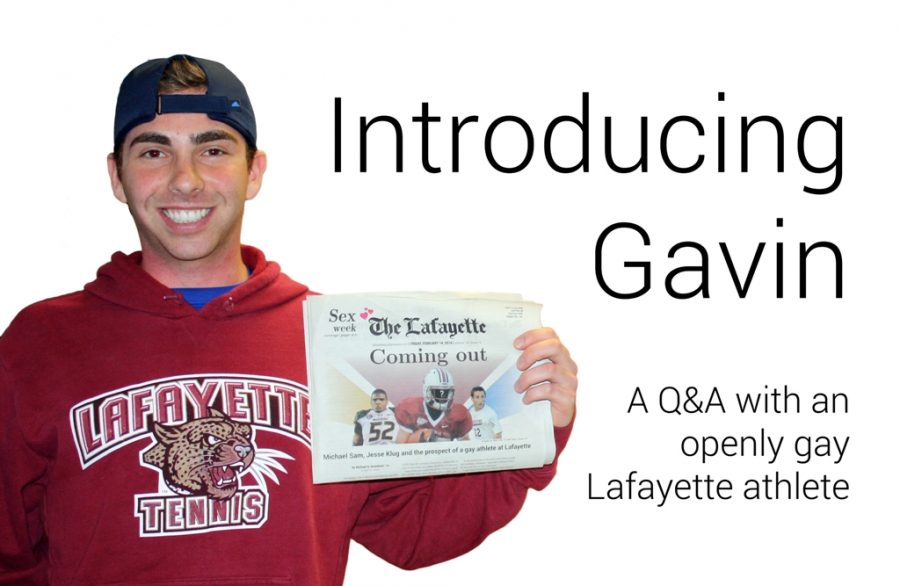 In last week’s edition of The Lafayette, the cover story “Coming Out: Michael Sam, Jesse Klug and the prospect of a gay athlete at Lafayette” examined Lafayette’s athletic community regarding a potentially openly gay athlete.
Three days after the article was published, Gavin Studner ‘16, an openly gay varsity tennis player, asked to tell his story.

The Lafayette: When did you first come out?

How did your teammates react when you told them?

They all took it well. In the beginning, they still used “this is gay” or “that’s gay,” and they didn’t really mean it in a derogatory manner. They don’t use it anymore, so I think it worked out really well.

When did you know that you were gay?

How involved athletically were you at that time?

I was fully involved. I played baseball, basketball, football, and lacrosse in the backyard with my dad.

Did the individual aspect of tennis play a factor in choosing a sport, knowing that you were gay?

No, that didn’t play a factor. Now, would I have come out if I was playing basketball for Lafayette? I think it would have been a little different, I’d need to be a lot closer with my teammates… taking team showers, being in the locker room together is definitely very different than being on the tennis team [when you don’t do that].

Do you think football or basketball players would have a tougher time acclimating to teammates being gay?

No, I think a lot of people on campus are pretty open about people being gay and they don’t really care. Personally, being a gay person, I would feel awkward in the situation, only because I would be wondering what they were thinking when we were taking a team shower or changing in the locker room or something.

How would you describe the gay culture here? If you want to date, what do you do?

I’m not a big part of the gay community on campus, only because being a student-athlete we don’t have enough time to be in clubs or anything like that. My first boyfriend, we met through a friend, I knew he was gay. People usually don’t know that I’m gay because people think of the stereotypical gay person.

So you usually meet people through friends?

Yeah. It’s hard to meet someone just through contact because it’s hard to tell that someone’s gay. There are closeted gay student-athletes at this school who have come to me and talked to me, but they want to remain closeted because of their teams, and I respect that. Do I wish that they would come out and support the gay community? Yeah, I do, because I feel more student athletes should show that, hey, I’m not afraid to be who I am. But if that’s that who they want to be, I can’t do anything about that.

How many athletes have come out to you?

Do you know of any other open gay athletes on campus?

I don’t know of any other openly gay athletes, no.

How many gay athletes do you estimate there are?

I have no idea. There’s just no stereotype anymore. That’s what’s incredible. There are teammates out there who use the word “fag” or “gay” derogatorily and they don’t know that maybe the guy next to them, their best friend, is a closeted gay person. So they’re actually hurting that person, and that’s what leads to people committing suicide who’re gay, because they’re thinking that if my best friend is saying this, I wonder how everyone else feels. And what would happen if I did come out, would he still be my best friend?

Is that a concern of the closeted athletes you spoke of? That they won’t be accepted by their teammates?

That is their biggest concern. They really talk to me more so about “what does it feel like to come out?”

How would you describe that then?

It’s a huge weight off my shoulders. Not having to worry about hiding something. I could finally date. It took me until I was 20 years old to go on a freaking date.

That’s why I really want to get into the athletic offices and talk to the athletic director, Bruce McCutcheon, and be like, “You want your student-athletes to be comfortable here at Lafayette, and you want them to excel in the classroom, on the court…you need to make them feel comfortable.” I don’t really think that there’s a really big opportunity for gay student-athletes to be themselves.

What is the significance of Michael Sam coming out?

It’s huge. It’s absolutely huge. I’m hopeful that this is going to be the start of gay athletes feeling more comfortable in their setting and saying, you know, if he can do it, I can do it.

What do you hope to see in regards to gay athletes going forward?

My goal is to have gay student-athletes be comfortable in this community, and being comfortable with who they are. I’d like to see the momentum keep going.

Do the other students feel comfortable enough to come out?

Have you had anything negative directed towards you?

No, nothing. Otherwise, I’d get in their face. If I’m playing a match and somebody knows I’m gay and they’re trying to get in my head and they say something at me, I will not be afraid to drop my racket and come to the net and say, “would you like to say that to my face?”

Is that your personality, or do you feel like you have to do that in order to subvert the stereotypes?

That’s a good question. And the answer is I pretty much do it because I want to, because I’m happy with who I am, and if you have a problem with it, I will get in your face, just because that’s me. Even football players, I’m not scared of them.

That makes one of us. Thanks for your time.

Thank you, I’m glad to do this.

Editor’s note: This Q&A was edited for length.