Down week: Lafayette beat at its own game 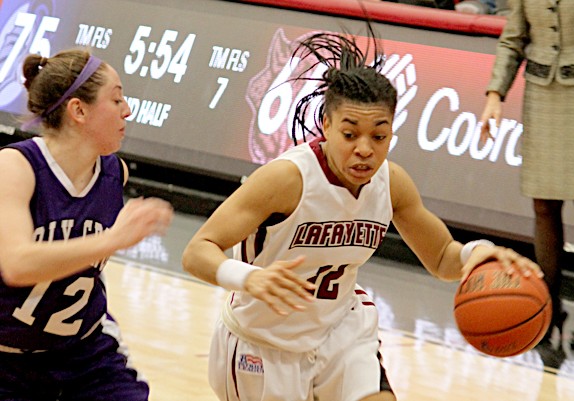 Normally the Lafayette women’s basketball team sees play in the paint swing to its advantage. But on Wednesday this wasn’t the case. When they faced Patriot League rival Holy Cross, the Leopards were outclassed inside as they fell to the visiting Crusaders, 90-76.

Before the game, head coach Dianne Nolan gave her team her prescription for success against the Crusaders.

“Holy Cross is a tough opponent, leading the league in offense,” she said. “We need to make every possession count and limit [Alex] Smith’s touches.”

The Leopards followed Nolan’s game plan to the letter, holding the third best three-point shooting team in the conference to a single trey and limiting Holy Cross guard Alex Smith to a nominal scoring performance.

Stymied beyond the arc, Holy Cross switched gears. Rather than launching three-pointers at every opportunity, the Crusaders uncharacteristically worked the ball inside.

“We have to shore up our defense,” Nolan said. “Our defense was poor tonight. When a team is a transitional team it takes our bigs out of it because they are just quicker and get the ball down faster. We have to help out more which we did outside, but not inside.”

When asked why Loughney was limited down the stretch Nolan responded, “I felt we needed a change on the defensive end.”

The second half resulted in worse defensive play for the home team giving up almost 50 points on 19-28 from the field, almost 68 percent.

The Eagles maintained their rank as the best defense in the Patriot League, limiting the Leopards to 36 percent shooting from the field and 30 percent from behind the three-point line. Though the margin of victory for American was 11 points, Lafayette came within seven after a late surge and a three-point play by Homan, who became the 16th player in program history to top the 1,000-point mark on the play.

“It’s exciting when a player reaches a thousand points, especially as a junior,” Nolan said. “Emily brings it everyday and it’s awesome to watch her hard work rewarded.”

Loughney, number 15, led the team in scoring with 14 points and also grabbed seven rebounds. On the other side of the court, Lafayette was able to limit American to 3-for-17 shooting from three-point range, way below the Eagles’ season average of 32 percent. However, Lafayette allowed the home team to capitalize on almost 50 percent of its interior shots.

“During stretches of the American game they scored after our missed shots in transition,” Nolan said.

With late buckets from American’s backcourt, the lead swelled to 11 and ended up sticking in spite of sophomore guard Jamie O’Hare’s late answer from three. O’Hare and Homan were the only Leopards in double digits for the game.