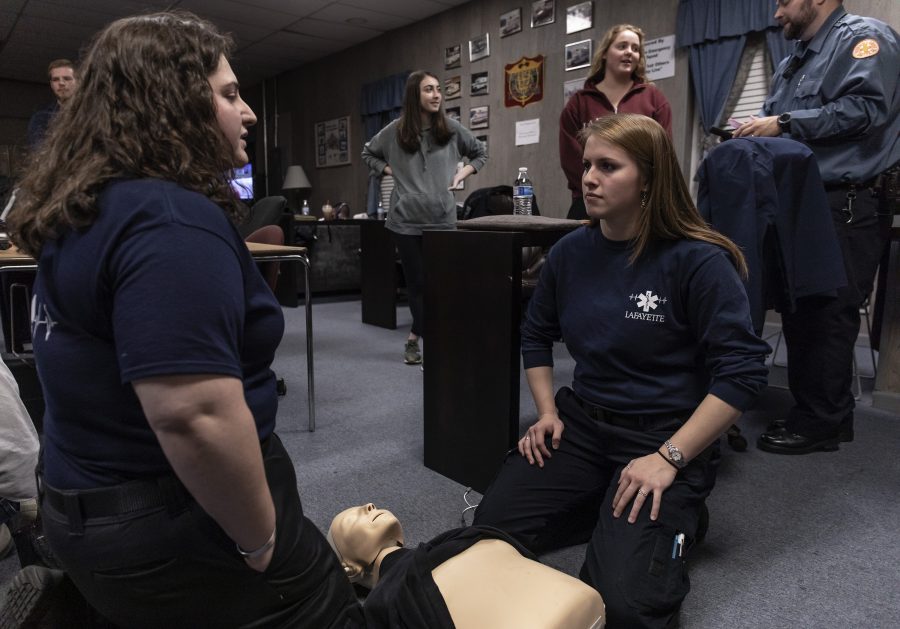 Lafayette students have been training with the Easton emergency medical response team to act as emergency responders on College Hill. (Photo by Elle Cox '21)

Lafayette students will be on call as Emergency Medical Technicians (EMT) in the College Hill area this weekend. Members of the EMS club on campus have been training with the Easton emergency response team to become fully-trained as emergency responders and this weekend will be their induction into the community.

Vice President of the EMS club Lauren Steinitz ’19 is the longest standing member of the club. When she joined about a year and a half ago, neither she nor the other members knew what direction the club was heading in. According to Steinitz, there were no board positions set in stone, members didn’t know if they wanted to be their own organization or the subsidiary of another, and past attempts to create a similar organization had failed.

Steinitz explained that many former Lafayette students have tried but failed to put together an EMS club on campus. One former student told Steinitz that she shouldn’t “waste her time” attempting to create the club.

Despite this opposition, Steinitz continued to work hard to bring the EMS club to life.

When the group was first getting started, one of the advisers, Vice President of Finance and Administration Roger Demareski, suggested that [the club members] look at partnering with the Easton Medical Squad, according to Rachael Broder, the club’s secretary. This partnership helped the club to avoid complex administrative aspects that are normally required for students to be administering medical care in the state of Pennsylvania.

By being a subsidiary of the Easton EMS, and having all students involved acting as Easton EMS volunteers, whether that be as an EMT or an observer, the club has all of the training, insurance and structure that it needs to operate.

Not only does this link between the two groups benefit students with experience and training, but it also benefits the Lafayette and Easton communities. Having an EMS group on campus drastically decreases response time in the case of an emergency because of the group’s proximity to the school. Response time also decreases because members of the club are well-prepared with what Steinitz called the “Bubble,” a cart stocked with supplies and items needed for basic life support care.

As a result, the student EMTs will not have to wait for the Easton EMS to arrive at the college to begin caring for a person in need, and a victim can be aided faster.

“One thing we’ve learned is the quicker you respond, the better the outcome,” said Demareski. “It’s just a given. Quickly getting to a patient is the goal of the program.”

In terms of the Easton community, as Broder explained, there is often a shortage of EMS staff, and having the Lafayette students assist the Easton Emergency Squad puts more much-needed hands on deck.

Carita said the students will be able to help out the Easton Emergency Squad “with responses to standbys, large events, and possible large scale disasters.”

Members of the EMS club will also gain experience through responding to emergencies in Easton. Broder noted that being on-call for the entire surrounding area increases the amount of patients one sees, as well as the type of emergencies one deals with.

All members are also required to do “ride time” on the ambulances. According to Carita, ride time “helps with training in real time, [as well as with forging] a relationship with providers.”

Members of the EMS club are excited to go on-call this weekend.

“To go from an idea to ‘this is happening’ is incredible,” said Steinitz.

“[The EMS Club] has been such a long time coming and now everything coming together feels so unreal,” added Broder.

Steinitz and Broder said that although they are expecting some nervous energy and potential bumps in the road, they feel that the group is very prepared and will be able to tackle any challenges.

Carita said that he is very proud of the progress the students have made, noting that “they worked extremely hard to get where [they] are right now.”

“When you’re in the moment you rarely think about what is going on…training kicks in, and you act on it,” said Carita.

His advice to those considering joining the EMS club was to “take [the job] seriously [and] with kindness” and to remember that “[they] meet others at their most vulnerable moments.”