Up next? Lafayette continues hot streak as conference tournament awaits 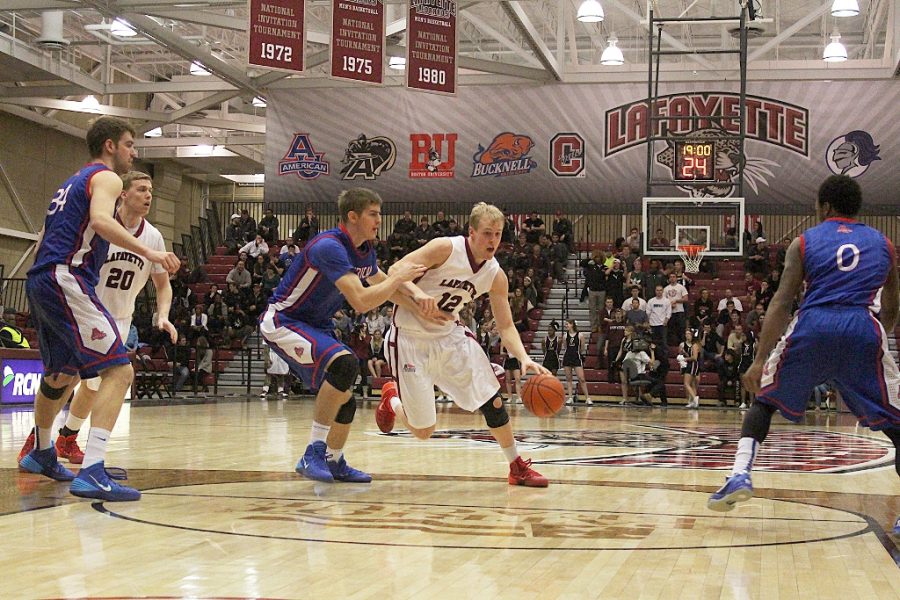 Lafayette Athletic Director Bruce McCutcheon tweeted the question that must be on the mind of all head coaches in the Patriot League currently: “Does anyone really want to play a @Franohan team in February?”

Good question. Does anyone have an answer other than no? Lafayette teams under head coach Fran O’Hanlon, or @Franohan for that matter, have developed a reputation for their late season surges into the Patriot League Tournament.

Last season, Lafayette, behind the stellar play of point guard Tony Johnson ‘13, strung together seven consecutive victories, including two against Lehigh, before losing to Bucknell in the conference championship game.

By the way it looks now, Leopard fans are in store for more late season dramatics. Lafayette (9-17 overall, 5-10 Patriot League) is rolling and after wins against first place American University (15-11, 11-4 PL) and Holy Cross (16-11, 10-5 PL) this week, it has now won three straight games and five of its last six.

There is no doubt about it: Lafayette is playing its best basketball this month and has significantly improved its formerly struggling defense. The resulting wins are no coincidence.

The one exception was an 88-54 loss to Boston University in which the Terriers shot 56.1 percent from the field to 32.7 percent for the Leopards.

“After that loss to Boston, we really came together as a unit defensively,” said forward and co-captain Seth Hinrichs ‘15, who was out for ten straight games with a knee injury in late December and January. “Guys are getting more experience playing together. We have freshmen in our lineup and it just took some time to get the experience under our belt.”

On Wednesday, Holy Cross shot 5-25 from beyond the arc.

“We really pressured and made their shooters put it on the floor,” Hinrichs said. “We wanted to force them to make a play driving the ball.”

Junior guard Joey Ptasinski has continued his hot shooting and added 16 points in the victory, including four 3-pointers. He has already surpassed his previous career best in made 3-pointers with 67 this season, which moved him to sixth place all-time in Lafayette history in made 3-pointers.

Ptasinski and the junior class, along with those younger than them on the team, have never lost in Worcester, Mass. against the Crusaders. The win Wednesday was their fifth straight at the Hart Center.

“My confidence is definitely pretty high right now,” Ptasinski said. “With Seth back, it frees up open shots for everyone and then it turns into pick your poison.”

Wednesday was also significant in another regard – the win was O’Hanlon’s 127th Patriot League victory, which passed former Bucknell head coach Pat Flannery for first all-time.

O’Hanlon will look to add to that record and the Lafayette win streak when archrival Lehigh visits on Sunday. The Kirby Sports Center will most likely hold its first sold out crowd since its $1.7 million renovation this past offseason.

“I am expecting a great atmosphere,” Ptasinski said. “Last year was awesome. The entire gym was packed and it is always fun to play in front of a packed gym.”

Tipoff is set for 12 p.m. The Lafayette will be on site with live coverage of the full game, including the post game press conference with both coaches and players from both teams.