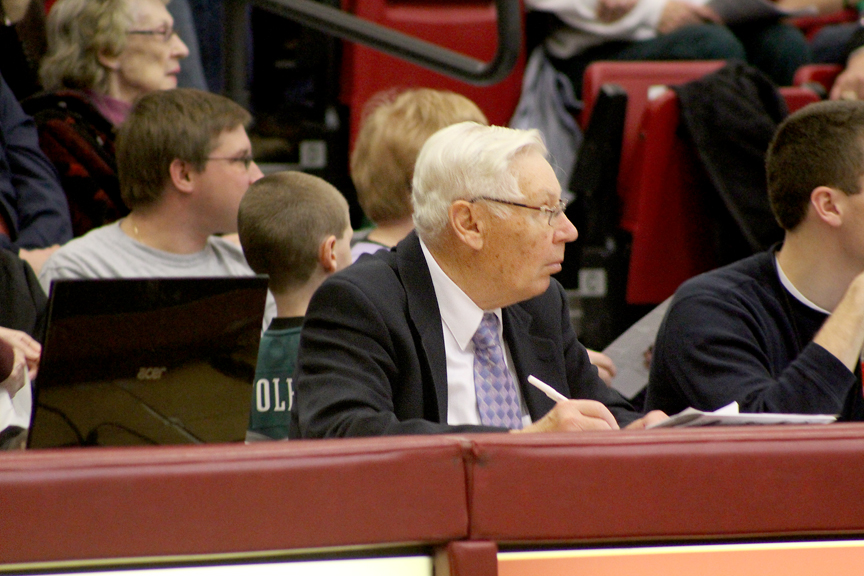 He sits along press row at each Lafayette home game quietly with his notebook and pen. He follows the action as intently as any fan, but his eyes are not on the players, but rather the officials. Observations of how the officials handle calls as well as coaches, bench personnel and even the crowd are recorded.

Heckling officials and questioning their judgment are commonplace pastimes for the sports fan. Rarely do fans compliment a well-officiated game. So many attendees at Lafayette men’s basketball home games will be relieved to hear that the referees they may scream at throughout the game are being refereed themselves, and held accountable.

Meet Walt Yost, an observer of officials for the Patriot and Ivy leagues, specifically Lafayette for the past eight years.

“I chart every call and make a comment about the call whether I agree or disagree,” Yost said. “I record calls that are missed, the time that the official made the call and what positions they were in at the time.”

Officials rotate between three positions: the trail, the lead, and the center. But there is much more to it than that. Yost grades the officials on how they conduct themselves during the pregame warmups, their appearance and physical conditioning, their attitude and professionalism they display, how effectively they use their whistle and voice and the confidence they exude while making calls.

He then submits his observations and numerical rankings from 1-5 on the various categories to Reggie Greenwood, who is the coordinator of men’s basketball officials for both the Patriot and Ivy leagues.

“I will rank officials as I seem them,” Yost said. “It’s a numbers game and [Greenwood] makes that decision [on whether to let them go or not].”

Yost boasts over 50 years of refereeing experience. He graduated from college in 1958 and as a way to supplement income with teaching he decided to start officiating.

“It was very common that teachers would go into officiating back then,” Yost said. “When I first started there were many teachers that were doing this and that’s not true today.”

Yost refereed high school in addition to Division II and III college games in and around the Philadelphia area. He served as umpire for NCAA baseball tournaments, which he classified as his “most successful officiating.”

He also holds responsibilities as a clock operator in the National Football League for 36 years. He makes trips to Philadelphia for Eagles games frequently and was the clock operator for the playoff game between the New England Patriots and the Indianapolis Colts in January.

“Athletics have been my whole life,” the Jamison, Pa. native said.

Near the tail end of his refereeing career, he began his work as an observer for several sports including football and baseball, but now focuses solely on basketball.

He classifies his job as “to see first hand what is transpiring.” When Lafayette played Navy at home on February 1, an official fell to the ground and damaged knee ligaments in the process after slipping on a wet spot. Yost was responsible for reporting it and helping guide the transition to just two referees controlling the game.

Just because he has worked Lafayette games does not mean his preference on who wins has swayed to the Leopards.

“It’s just like with the NFL. You would like your team to win but you’re hired by the league and you’re a nonentity when you watch the game,” Yost said. “I think I have done a pretty good job at that.”

Keep an eye out for him if Lafayette hosts a home playoff game in the Patriot League Tournament. He will be in his usual spot, with his pen and notebook, ensuring proper officiating.

* Who watches the watchers themselves?