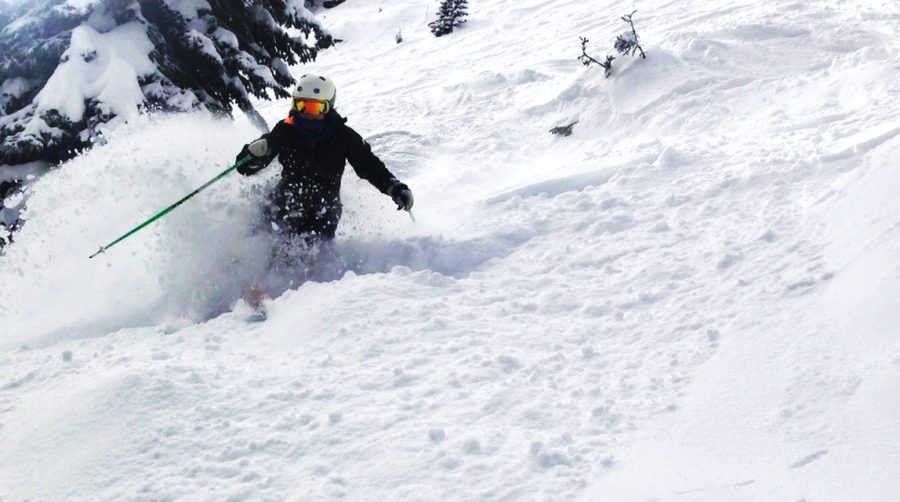 “It’s exciting. It’s nerve-wracking. It’s also some of my closest friends I was competing with.”

Coyne, now a senior at Lafayette, brings a lifetime of skiing experience to the Lafayette ski club. Before joining the club at college, she was competing in national championships in the mogul category of freestyle skiing. Three weekends ago, she won her third consecutive conference championship in freestyle while representing Lafayette.

Born into the ski culture of Colorado, Coyne began skiing at just two years old. It was her family that taught her before they introduced her to a ski club around the age of eight.

“My dad is a snowboarder and my mom is a skier,” Coyne said. “They put me and my two siblings in the ski club in our valley when we were young. We would try everything. We tried alpine. We tried freestyle, nordic and from there you chose what you liked. Then, I went into a mogul-specific program.”

Coyne said she and her coach, Gary Fisher, found that she excelled more at freestyle than alpine skiing. Her rigorous training landed her a qualification spot to compete in North American Cup races (Nor-Ams) when she was just 15, where she competed on international stages in the USA and Canada.

“It’s awesome,” she said. “It’s really fun to compete at a higher level in an international field, and it was a really cool opportunity. Some of my best memories from high school were not just on the mountain, but traveling with the team off the mountain.”

With all of the travel, Coyne said it was the flexibility of her high school that allowed her to make up schoolwork, and she did plenty of it on the road. She attended the Vail Ski and Snowboard Academy in Vail Valley, which produced Tess Johnson, Mikaela Shiffrin, Lindsey Vonn, and Thomas Walsh, who all represented Team USA in the 2018 PyeongChang Olympics.

“This past Olympic season, the four girls and four boys who went were all close friends of mine and half of them were on Team Vail,” Coyne said.

Her achievements in NorAms qualified her for two trips to the national championships. She missed one year because the trip would have been a long an expensive trip. After missing the chance to qualify due to a torn ACL the next year, she bounced back to make it to the closer Utah location, where she competed in a field of 50-60 women, from Coyne’s estimate. Coyne added that the level of competition is similar between NorAms, nationals, and US selections.

“It’s usually a week-long competition [at nationals], so we would train for a few days and then two-day competition,” she said.

Going to school and NorAms with her ski-minded colleagues, Coyne was competing against people she knew well.

“Even though we were really competitive and wanted to do our best, everyone was really supportive and encouraging,” she said.

Coyne said her close friends at Lafayette know of her skiing achievements, but she’s unknown to her club opponents when competing at the collegiate level. She and her teammates learn from each other at club practices.

“Last season I was the freestyle captain,” Coyne said. “It was really fun because the team dynamic changes every year, but we’ve had more girl freestyle skiers over the past two years, which is cool because we can push each other and improve with each other.”

“It’s more fun where we’re all out there together,” she added. “You wouldn’t throw new tricks or try harder things if you didn’t have friends with you.”

In college, Coyne switched her freestyle competitions to slopestyle and rail run because mogul races aren’t available at the collegiate level.

“It’s kind of a bummer,” she acknowledged. “So, friends of mine who continue to ski mogul take time off of school, or take classes in fall or summer, but I was ready to go to college.”

Coyne said she was interested in engineering and wanted a small school because in her high school, her senior class was just 20 students. She also wanted to “experience living on the east coast.”

“Here [at Lafayette], academics definitely come first, where in high school, skiing might have come first,” Coyne said. “It’s fun here because we go away for the first couple of weekends of the spring semester as a team.”

Coyne enjoys the club ski team with its wide array of experience among the members. While Coyne has skied her whole life, she said some people had only skied for fun before joining, and were new to competition.

“We’re like a family,” she said. “It’s all people who really enjoy being in the mountains and have a passion for skiing. I think it’s just a really cool group of people on this campus.”

The women’s and men’s teams qualified for regionals, which are this weekend in Seven Springs, Pa. At regionals, they hope to qualify for nationals.

“Just to go out there and lay down a good run, that’s all you can ask for, to ski your best,” Coyne said.